One Deity among Dragons, One great Wyrm to rule all Wyrms of the World, by the Creator Himself created. Legend says it is an Anima, Guardian to a Sacred Blade. Though most sacred among its Kind, its great Power drove it to Madness, and in the End, it became a Threat to its own Creator. His Master was killed by Yiazmat, robbing Montblanc of all Joy in Life, and he would have Revenge.

Yiazmat is a holy dragon of immense power that first appeared in Final Fantasy XII as a superboss.

Yiazmat bears many similarities to the recurring boss Shinryu. Like Shinryu, Yiazmat is a holy dragon spoken of like a deity, is said to be the guardian of a powerful sword, and accepting the hunt for Yiazmat in Final Fantasy XII allows the party to fight Omega Mark XII; Shinryu and Omega are often depicted together as hunting one another. As Shinryu does not appear in any games set in Ivalice, Yiazmat may serve as Shinryu's substitute among the enemy roster.

Yiazmat is the ultimate Elite Mark fought on the Colosseum on the Ridorana Cataract. Montblanc petitions Vaan and the party with felling the beast after they have vanquished the Hell Wyrm and all Rank VII Marks except Shadowseer.

Defeating Yiazmat takes at least an hour at high levels and player skill, but usually takes longer. Yiazmat has well over 50 million hit points, the main reason he takes so long to kill, since regular attacks could not break the damage limit in the original version. In contrast, the correct strategies in Zodiac versions will easily break the damage limit, making the battle much shorter.

The Godslayer's Badge obtained from the hunt is required to make the Wyrmhero Blade at the bazaar. Defeating Yiazmat unlocks his sprite in the Sky Pirate's Den, earning the player the title of Hunter Extraordinaire.

Wyrm whose powers defies even the gods.

Yiazmat's bestiary entry in Final Fantasy XII mentions it as a guardian to a sacred blade, and its loot reward was needed to make the legendary greatsword, the Wyrmhero Blade. In Revenant Wings winning the battle augments Vaan's sword, the Anastasia, increasing its Attack, Mind, Stamina, Magick, and Strength by ten each. This can be done repeatedly by taking Midlight's Deep again and felling Yiazmat over and over.

Yiazmat appears as the final boss in the 24-man instance the Ridorana Lighthouse, part of the Return to Ivalice storyline. In this instance, Yiazmat is a mutated and transformed Ba'Gamnan.

Yiazmat has over 30 million HP.

Yiazmat appears as an enemy in Battle Music Sequences.

Yiazmat appears as a boss. 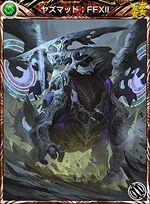 Yiazmat's name alludes to Final Fantasy XII director Yasumi Matsuno's nickname (Yazumi Matsuno). The additional "i" in Yiazmat's name is not present in the Japanese version, likely being a localization decision to associate it closer to "Tiamat." The title of the hunt is "Farewell to a Legend," a reference to how Matsuno left Square Enix before the game was completed.