Yeti's Cave is a dungeon in Final Fantasy VI. It is a secret icy cave located beneath the cliffs of Narshe, and is accessed via a passage opened when the esper, Valigarmanda is thawed in the World of Ruin. Most of the enemies here can inflict Imp. The cave is also the lair of the Tonberries and Umaro.

The Returners gain access to the Yeti's Cave in the World of Ruin after defeating Valigarmanda. At the end of the cave they find a carving out of bone with the magicite Midgardsormr in it. They remove the magicite, but this prompts the yeti Umaro to attack them. When he is defeated, Mog declares himself Umaro's master and orders him to join the party, and a docile Umaro agrees.

The Yeti's Cave uses the same type of rough layout as the other mines of Narshe. The presence of man-made supports and bridges makes it possible that the Narshe miners had some previous activity in this cave, though this is unknown. The cave contains several pitfalls, some controlled by switches and some triggered when stepping over them. Umaro's lair in the back of the cave contains some tools, possibly his, and a carpeted area. The exit at the back of the area overlooks the Narshe mines and the party drops down to a ledge upon exiting the Yeti's Cave this way.

If the player opens the left-most treasure chest, a monster-in-a-box encounter against three Tonberries will commence. They have 14,001 HP each and can be rather difficult to deal with. Tonberries appear on the Veldt and can be used to farm Minerva Bustiers since they have them as a rare steal and a rare item drop.

Umaro can be found from his lair at the end of the Yeti's Cave. If the party examines the bone carving, the magicite Midgardsormr can be seen in the eye. Should the player remove the magicite, Umaro will come trampling down from the exit shaft and the party has to fight him for the possession of the magicite. Defeating Umaro lets him be recruited if the party brings along Mog who can talk to the yeti. 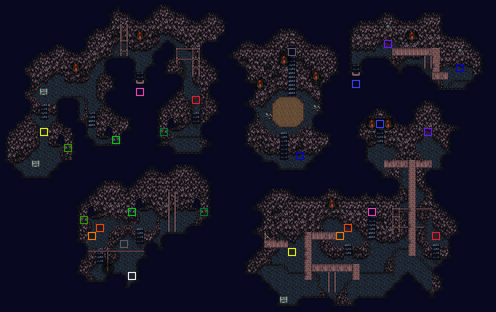 "Umaro's Theme" is the background theme of its cave.

The Yeti's Cave is the setting for a regular dungeon and it is also the name of a "++" difficulty battle in the Challenge Event Assassin in Black.

Some unused content suggests that Yeti's Cave was intended to have been accessible in the World of Balance. A dummied version of Umaro as a boss exists in the game data, with much lower stats. 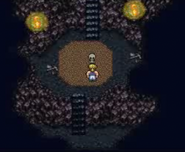