Lightning-quick wyrm that crackles with electricity.

The Yellow Wyrm is an Lightning-elemental enemy from Final Fantasy XII: Revenant Wings. It is a Rank II Yarhi.

Its special attack, Plasmaball, deals Lightning damage to one foe. It cannot be summoned by the player. 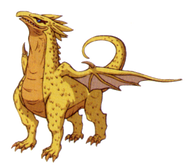 Retrieved from "https://finalfantasy.fandom.com/wiki/Yellow_Wyrm?oldid=3220059"
Community content is available under CC-BY-SA unless otherwise noted.