You dolt! You and I might still be able to stop it! We can find a way, like we always do. We can do anything!

Yda Hext is a non-player character from Final Fantasy XIV, and one of the main characters of Gridania's storyline.

She is a Hyur Pugilist that is found in the Twelve Woods nearby Gridania after falling from an airship. While Yda is a good fighter, she is notoriously lacking in tact and manners, a fact that she is constantly scolded by her companion Papalymo for. Her main reason to stay in Gridania is discovering if the city-state is planning a war against the Garlean Empire, and is from the city-state of Sharlayan. Like the other members of the Circle of Knowing, she has a tattoo on her neck.

Yda is found with Papalymo laying in the Black Shroud, after ejecting from their airship and welcomed into Gridania after being found by the Adventurer. The conjurers of town are lead to believe that the duo is beckoned by the elementals, and therefore are expected to do something for them, a fact that makes Yda proclaim herself as a "Savior of the Wood".

During the course of Gridania's storyline, she is often seen with the conjurers preparing for the great ritual set to happen in the city-state. Yda and Papalymo are the ones responsible for finding Dunstan and bringing him back into town. After the ritual, the Echo reverberates and the skies turn black, a fact that makes Papalymo comment with Yda that they "should've stopped it, and now it's too late", to which she replies that they still can find a way to stop it.

She is not seen again until the eleventh mission, "Futures Perfect", where she joins forces with Papalymo, Y'shtola, and Thancred in their fight against the Imperial Legatus. She is notably the only character to land a hit on the Garlean general. If the Adventurer's home nation is Gridania, she and Papalymo are the ones who appear at the end of the mission, telling about the greater power needed to defeat the Garleans.

Yda, Papalymo and Kuplo Kopp are first encountered during the "Chasing Shadows" quest, inspecting the disturbance in the aetheric flow inside the Central Shroud. While speaking to the Adventurer, they are attacked by a group of Treants. The two help the Adventurer fight the attacking Treants and they manage to defeat the monsters. After defeating the monsters, Yda and Papalymo watch over the Adventurer after they faint from a surfeit of aether.

She is one of the few Scions to evade capture by Livia sas Junius after the Garlean Empire attacks their headquarters at the Waking Sands.

After the success of Operation Archon and the defeat of the Ultima Weapon and Gaius van Baelsar, she continues her duties with the Scions, supporting the Adventurer whenever their activities lead them to the Black Shroud.

When the Scions are betrayed by the Crystal Braves and framed for the assassination of Nanamo Ul Namo, she stays behind with Papalymo to buy enough time for the other Scions to escape. During the ensuing battle, her mask is broken, revealing part of the covered portion of her face for the first time. She and Papalymo are presumed dead after they stay behind to hold off the Scions' pursuers; however, neither the bodies of her or Papalymo are found amongst the dead in the aftermath. Their linkpearls would later be found in the streets of Ul'dah, deliberately stepped on and destroyed.

During the final quest of patch 3.1, Yda, along with Papalymo are shown to be gathering in a cave along with many others, in what is likely a preparation by the Ala Mhigan Resistance for an attack on the Garleans. Papalymo mentions that they can't stay here forever, as they have other responsibilities. Papalymo is seen urging Yda to consider the "Masks" carefully and find out more about their goals, to which she nods in silent agreement.

Alphinaud and the Warrior of Light reunite with Yda and Papalymo at a rally held by the Masks. They explain how they came to be involved with the Resistance, and what they know of the Masks. They agree to arrange a meeting with The Griffin's proxy, a double posing as him at the rally. Through this they learn of a gift of crystals intended for Amalj'aa, leading to a fateful confrontation with the Warriors of Darkness. Outside Little Ala Mhigo, Gundobald greets Yda, who claims he and her father used to fight in the Resistance.

So, this is it. Whatever I choose to do from now on, I do as Lyse. ...And I choose to continue my family's fight. I want Ala Mhigo to be the country that Yda and my father always wanted it to be!

Lyse, after revealing her true identity.

A friend of hers in the Ala Mhigan Resistance, M'naago, arrives at the Rising Stones wounded. As she is treated, she warns the Scions that The Griffin is plotting to attack Baelsar's Wall. Yda travels with Papalymo and Yugiri in secret tunnels to try to reason with the Griffin. Once his true intentions became apparent, Alphinaud rushes after them. They eventually catch up with the Warrior of Light upon the Wall, who just defeated the Griffin. The man reveals himself to be the traitor Ilberd. Having not only came into possession of the Eyes of Nidhogg, his true goal was to sacrifice his soldiers and even himself to summon a primal against Garlemald.

As the primal began to manifest from the dying life energies of the soldiers and the Eyes, Papalymo orders everyone else to flee while he walks the path he must follow. Yda desperately protests what he is planning and asks to stay by his side. Understanding what Papalymo is going to do, Thancred forcibly carries her back to Hilda's airship as a cocoon of light engulfs the manifesting primal and Papalymo. Sullen and grief-stricken, Yda watches over the shell with Y'shtola and Yugiri at the East Shroud.

The Warrior of Light teams up with Nero tol Scaeva and uses the dormant Omega to defeat the primal Shinryu which births from the shell. Following the encounter, with the last of Papalymo's aether having left the world so too does the tattoo on Yda's neck disappear; A fake created by Papalymo's magic. With Papalymo truly gone Yda reveals the truth about herself. That the real Yda died six years ago and her true identity is Yda's younger sister Lyse. Y'shtola admitted to having known Lyse's identity from the moment they met and that she and the others agreed to keep up the charade at the request of Papalymo. Lyse decides to honor Papalymo's final words to her by acting under her true name and fighting for the freedom of Ala Mhigo.

Yda's outfit consists of a white jacket, a dark red sash undershirt, fingerless gloves and a pair of red armored greaves. Her most distinctive feature is the mask that conceals her face, which originally belonged to her sister. Like the other members of the Circle of Knowing, she wears an aetheric contraption, worn on front of her turban. During the events of Ul'dah, her mask is damaged, partially revealing her face.

Yda is laid-back and has no problem speaking whatever is on her mind in any situation, more often than not speaking inappropriate things—and being scolded by Papalymo right after. She has no qualms asking others directly about any subject, instead of trying more subtle means. She is also not very knowledgeable, often needing Papalymo to explain certain things to her. Despite all this, she does act more seriously upon a crisis, as well as being optimistic. She is an apt fighter, but rarely gets into fights needlessly. Together with Papalymo, she provides most of the game's comic relief, especially in Gridania's storyline.

Yda is voiced by Mela Lee in the English version.

She is voiced by Aya Endō in the Japanese version.

Yda has appeared in the following games throughout the Final Fantasy series:

Yda appears on a sticker set for the LINE communications app. The sticker set she appears in is titled "ファイナルファンタジーXIV.[1] 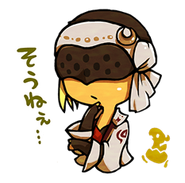 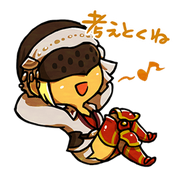 Render of Yda for the original Final Fantasy XIV.

Yda in The Far Edge of Fate artwork.

Yda without her head gear in version 1.0.

Papalymo and Yda pray to The Twelve for salvation.

Papalymo and Yda in the opening of A Realm Reborn.