Intimidating mountains tower over the harsh plains and tall vegetation, adding to the ominous atmosphere of this land found in the southern region of Gran Pulse. A short walk through the treacherous valley leads to the Paddra Ruins - the remains of what used to be one of the largest and most prosperous cities on Pulse. As with the Bresha Ruins, the area is filled with scientists and soldiers sent to investigate the location.

The Yaschas Massif is a location on Gran Pulse in Final Fantasy XIII and Final Fantasy XIII-2. It is the site of the ruins of the city-nation of Paddra where the Farseers lived before it fell into ruin. The Paddraean Archaeopolis is a segment of a ruined cityscape. Some of the Paddraean architecture resembles the remains of modern skyscrapers.

Ten years after the fall of Cocoon, during Final Fantasy XIII-2, soldiers and scientists from the Academy reside in the Paddra Ruins, the origin site of the numerous spacetime anomalies.

This mountain group stretches across a southern region of Gran Pulse. The area's geography is diverse, consisting of scenic highplains, sheer escarpments, and deep fault valleys, with mammoth fallen trees a common sight across its landscape.

At the massif's southernmost tip lies the ruin of the fallen city-state Paddra. Once the flourishing center of an advanced culture, it is now nothing more than a Cie'th-infested archaeopolis.

The Yaschas Massif, in Pulse's southern reaches, is home to the ancient ruins of Paddra. Paddra was the only advanced civilization of ancient Gran Pulse, but after the War of Transgression between Pulse and Cocoon, it began a long decline that ended in its complete disappearance.

The tough, mountainous terrain is a popular draw for mountaineers and other outdoor types. We recommend visiting Paddra, awe-inspiring even in ruins. Also worth a hike is the viewing platform next to the dormant fal'Cie.

Originally home to a tribe called the Farseers, Paddra was a nation ruled by Paddra Nsu-Yeul as both its seeress and priestess. Etro was Paddra's patron deity, while the rest of Gran Pulse worshiped Pulse. In the past, forced to go against her vows when Paddra's warriors could not defeat it, Yeul sealed away a time-eating Ugallu in the Void Beyond that had ended up in her time. Though this saved her home, Yeul still foresaw the destruction of Paddra. After civil war destroyed the nation, Yeul renounced her position and left to wander Gran Pulse.

After Paddra has long been abandoned and in ruins, only monsters and Cie'th wander its streets. A party of l'Cie escapes Cocoon and descends on Gran Pulse seeking a way to change their destiny and wipe their l'Cie brands clean. They can visit the Yaschas Massif where Hope and Vanille talk about telling lies as a coping mechanism. At the Paddra Ruins, Vanille and Fang recall some of their past and the mystery behind their brands. The l'Cie catch sight of the fal'Cie Dahaka—provided they have not already fought it—and decide to follow it towards Oerba.

In 10 AF, the Yaschas Massif is darkened by an eclipse caused by the fal'Cie Fenrir, appearing centuries before its time due to a paradox. The Paddra Ruins are occupied by members of the Academy, including its leader, the now adult Hope, and his assistant, Alyssa Zaidelle, as they research paradoxes. Hope encounters Serah, Mog, and Noel after saving them from an Aloeidai.

Hope tells them about the ruins' history and of Yeul, whom Hope believes was a title. He reveals an ancient recording device called the Oracle Drive that contains past visions of the events leading to the Day of Ragnarok, including blurred images of Lightning in Valhalla.

Noel and Serah travel through the Historia Crux to solve the paradox affecting the Yaschas Massif and the Oracle Drive. Successful, they return to an alternate 10 AF called 1X AF where Fenrir is gone, and with it, the eclipse. Before Serah and Noel enter the ruins of Paddra, its former seeress, Yeul, appears and points Serah as being similar to herself in how they can both "show people the way". In resolving the paradox, Hope and Alyssa's memories are modified, and Noel and Serah repeat their initial meeting with them.

Hope shows them the now-clear images of Lightning in Valhalla with the Oracle Drive. Like Noel and Serah, he wants to change history and not just to bring back Lightning but also Vanille, Fang, and his mother, Nora. The Oracle Drive shows Caius Ballad destroying the crystal pillar, sending the crystallized Cocoon plummeting to the ground. Hope, Noel, and Serah resolve to do whatever they can to prevent it.

By 100 and 110 AF, mysterious objects called Rubies of Grief have appeared throughout the Yaschas Massif because Yeul's sealing of Ugallu caused a paradox that sucked people into rips in time. In place of the victims are Rubies of Grief, embodying their regrets, which Serah and Noel help pass on by fulfilling their requests. In 110 AF, they find an orb holding the memories of the Yeul who had banished Ugallu, the monster's seal having broken. By defeating the monster, Yeul's Ruby of Grief vanishes.

In Final Fantasy XIII, the Yaschas Massif connects with the Vallis Media. Southern part stretches from east to west across a deep ravine and to navigate through that part, jumping is required. The south-eastern side has two plateaus: one on high ledge and other on the lower that requires walking down a narrow pass infested with Triffids. At the west, there is a way in the valley that splits in two, eventually reconnecting and leading into the ruins of Paddra, ancient capital of Gran Pulse. The square at the end of the ruins has a mysterious structure that houses the Undying, Vercingetorix.

In Final Fantasy XIII-2, the Yaschas Massif is smaller, possibly due to a paradox effect, allowing only the Pass of Paddra and ruins of Paddra to be visited. The Pass of Paddra had undergone some changes and now features more side paths that lead to the ruins. The ruins house a dormant, unnamed fal'Cie, which reacts to the Oracle Drive. The structure housing Vercingetorix is gone, possibly removed by researchers, and access to the upper levels of the ruins is granted.

10 AF
The Pass of Paddra

The Pass of Paddra area has searchlights to secure safe passage to the ruins. When an enemy group appears and the player character is within the light provided by the search light, the clock hand on the Mog Clock will stay still.

1X AF
The Pass of Paddra

The eponymous theme, "Yaschas Massif", plays here. It has the style of bossa nova. When played in-game, the tune comes to a distinct end before starting up again, as opposed to the normal practice of continuous looping. The track is included on the W/F: Music from Final Fantasy XIII -Gentle Reveries- album. A live recording of "The Yaschas Massif" is the thirteenth track on the A New World: intimate music from Final Fantasy - Volume II album.

"Eclipse" and "Eclipse ~Aggressive Mix~" are associated with the Yaschas Massif in 10 AF, and are composed by Mitsuto Suzuki with vocals performed by Michiyo Honda. The "~Aggressive Mix~" version plays whenever monsters appear. "Parallel Worlds" and its aggressive mix play in 1X AF.

"Yeul's Theme" plays in a scene associated with Yeul in 1X AF. "Worlds Collide" plays in the battle against Aloeidai.

A map of the Archylte Steppe (the top), the Vallis Media (the middle) and the Yaschas Massif (the bottom). 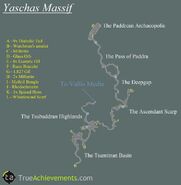 XIII Map
Add a photo to this gallery 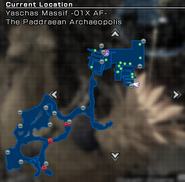 XIII-2 Map
Add a photo to this gallery

Should the player undertake the Cie'th Stone missions sidequest in Final Fantasy XIII, various entries under the Analects section of the main menu attribute their text to Yeul.

The scenes of Lightning fighting from the Oracle Drive of 10 AF are from the beginning of the Siege of Eden when she, Vanille, Odin, and Hecatoncheir are battling PSICOM on the race track.

during Live Trigger in 1X AF while talking with Hope, Serah will reveal that Paddra was constructed 670 years before the events of Final Fantasy XIII. No one asks how Serah knows that, but it is possible that the Eyes of Etro she possesses let her have memories that once belonged to Yeul.

Sazh, Lightning, and Snow in the ruins of Paddra.

Hope in the Yaschas Massif.

The Japanese dungeon image for Yaschas Massif, Part 2 in Final Fantasy Record Keeper.
Add a photo to this gallery

Concept art of the Academy camp.

The fal'Cie statue.
Add a photo to this gallery

The Pass of Paddra.
Add a photo to this gallery

The Rubies of Grief.