Daniel Woren*(Credited as Jackson Daniels in the DS version)

The mustached warrior monk of the military nation of Fabul.

Yang Fang Leiden is a playable character in Final Fantasy IV and its sequel, Final Fantasy IV: The After Years. He is a Monk from the kingdom of Fabul, and is among the highest ranked and most respected of their number. Despite this, he is a humble man, and so does not bask in his glory, but rather tries his best to be respectful. Yang is generally well disciplined, but has trouble with sleeping in, requiring the intervention of his wife and her trusty frying pan to wake him up.

According to the Japanese spelling, Yang is pronounced [jɑːŋ], not [jæŋ] as is more common for the word yang as it is typically used in English. This pronunciation is reconfirmed in the English localization of the 3D versions.

In all his appearances and artwork Yang sports a blond mustache and shaven head save for his braided blond ponytail. In Final Fantasy IV and his Yoshitaka Amano artwork he is shirtless, with red wrist bands and pants tied at the ankle; a yellow sash around his waist, and flat brown shoes. He wears red earrings, and has a red tattoo on his left shoulder. In The After Years he retains the red pants, but now wears a red and purple sash over his left shoulder, and another tied to his left thigh. He wears white boots, and his hair and mustache are substantially longer.

Despite being a monk who fights with his fists, he is drawn with swords hanging from the belt in his Amano artwork.

Taciturn, humble and polite, yet fiercely protective, Yang dislikes hurting others or involving them in dangerous situations, but is always grateful for assistance. His high standing in Fabul means that he has garnered much respect, and the only person he appears to quail before the might of is his own wife. Yang copes with stressful situations by training himself and the other monks, though still cannot stop himself from rushing to Sheila's side as she gives birth.

During The After Years he initially refuses to train his daughter Ursula, believing she has no need to train for war. After witnessing her selfless protection of the monks accompanying her, he takes her on as a disciple, warning that she is just another student, not a daughter or a princess. According to Sheila, Yang admitted to her privately "How can I believe in my people's future if I cannot even believe in my own daughter?"

While training with fellow monks atop Mt. Hobs, Yang is attacked by a swarm of monsters. His men perish, leaving Yang to face the Mom Bomb alone. Cecil Harvey, Rosa Joanna Farrell, Rydia, and Edward Chris von Muir arrive at the summit and help Yang in battle. Yang is grateful for their intervention, but Cecil and Rosa suspect that Golbez planned the assault to allow the Red Wings of Baron seize the Wind Crystal from a defenseless Fabul. Although reluctant to drag these allies into the conflict, they testify the tragedies they witnessed and Yang accepts their help.

At Fabul, the party convinces the King to prepare for an imminent attack. Yang, Cecil, and Edward lead Fabul's monks at the front lines, but the enemies force them to retreat further and further into the castle, until a last stand is made in the crystal room. Cecil's childhood friend, Kain Highwind, attacks him while Golbez paralyzes Yang and Edward allowing Kain to kidnap Rosa and steal the Wind Crystal.

Cecil, Rydia, Edward, and Yang plan their next course of action: sail to Baron and acquire an airship from Cid Pollendina to look for Rosa. The King of Fabul permits Yang's leave, but en route Leviathan attacks the ship and Rydia falls into the sea. Yang dives in to save her and the party is separated.

Yang fails to save Rydia, and believes her to have perished. Washing ashore in Baron, a temporary case of amnesia leads Yang to becoming an officer ordered to find Cecil, the King of Baron's most wanted traitor. When Cecil arrives at the inn with Palom, Porom, and Tellah, Yang attacks them, but they return him to his senses. Yang rejoins the party, and finding that he was given the Baron Key, the party enters Baron Castle via the Ancient Waterway. They defeat Cagnazzo in the throne room, the Baron King's impostor. They find Cid and Palom and Porom sacrifice themselves to save the party from a trap. Cid leads the three men to his airship, the Enterprise.

The party acquires the Earth Crystal to free Rosa from the Tower of Zot. Tellah sacrifices himself to battle Golbez who retreats, freeing Kain from mind control. Cecil, Rosa, Kain, Yang, and Cid discover a way to the Underworld, where Cid leaves to repair a destroyed Enterprise and the returning Rydia saves the party from Golbez. At this point, Golbez has acquired three of the four Dark Crystals, and has housed them with the four Light Crystals at the top of the Tower of Babil.

The party wants to head out to retrieve the seven Crystals, but the plan is interrupted when the dwarves face annihilation by the Super Cannon. Even though they dispatch the monsters at the helm the cannon is already activated, and Yang sacrifices himself to take its force, locking out the party and refusing to move. The others presume him to be dead.

Yang survived thanks to the Sylphs, but is severely wounded and remains unconscious during his rest in the Sylph Cave. Cecil's party finds the unresponsive Yang and inform his wife who plans to wake him with a frying pan. Despite the Sylphs' objections, Yang is whacked into consciousness, though the Sylphs insist he must continue to rest, offering their power to Rydia in his place. Yang recovers in time to join the attack against the Giant of Babil, commanding a tank with the Sylphs. Returning to the Tower of Wishes in Mysidia to pray for the party's final battle, Yang encourages them to maintain their focus.

With peace brought to the world, the King of Fabul abdicates his throne to Yang and becomes his Duke Consort. Yang is ready to lead his country, while still returning to his regular training.

Yang attends the ceremony to celebrate the reconstruction of Damcyan, but receives word from a guard that some monks were attacked at the summit of Mt. Hobs. Cecil and Rosa accompany him to investigate. They find two injured monks, whom Rosa heals. After being attacked by Dad Bomb they head to Fabul where Yang's wife, Sheila, is about to give birth. Yang asks Cecil to be the godfather and to name her daughter, which he gladly accepts and calls her Ursula.

When Cecil and Rosa are about to leave they find Cid, Luca, Palom, and Porom, who tell Cecil that a swarm of monsters is coming out of the Sealed Cave. Cecil tells Yang to stay with his family. Cid notices that Rosa looks pale, and Cecil asks Yang to take care of her while he is away.

Taking his place as the king of Fabul, he upholds the teachings of the royal dynasty and leads the people of Fabul. His training as a monk remains unchanged, and he hasn't neglected his personal discipline. His greatest desire is to be able to gently raise his only daughter, Ursula. 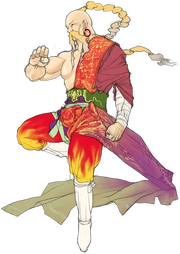 Though now King, Yang still trains as a monk and has his daughter, Ursula, train in the martial arts. He is among the first to see what seems to be Kain working with the Mysterious Girl to gather the Crystals. After Leviathan swallows their ship the unconscious Yang and Ursula end up in Kaipo where Rydia's party finds them. They wake Ursula with the ladle and knock Yang with the frying pan. They join them to help break a force field before confronting the Mysterious Girl in Baron.

After assisting in the battle against various bosses the Crystals hold, they face off with the girl and Bahamut. They confront the Creator, who pursues them through various battles before his ultimate defeat by Meteor. Yang returns to Fabul where he finally trains Ursula, reminding her that he is not going to go easy on her just because she is his daughter.

In Final Fantasy IV Yang has very high HP and high physical stats, and strong abilities to deal physical damage, though his armor is limited to lightweight armor and his weapons are limited to claws. While the claws provide little battle power, he is strong even barehanded, and his claws primarily add elemental and status effects to add to his damage.

Yang's abilities are Kick, Brace and Focus, where Kick deals slightly lower damage than a normal attack to all enemies, Brace reduces more damage than Defend, and Focus increases physical power, though it functions differently between the 2D and 3D releases. In the 2D releases, Focus skips Yang's next turn to deal double damage, and in the Advance and Complete Collection releases, completing his Lunar Trial and equipping the Discipline Armband upgrades the command to Deadly, which deals triple damage. In 3D releases, Focus charges power up to three stacks to deal more damage with a Kick or Attack.

Yang is fought as a boss (2D and 3D) in Baron after being separated from the party.

In Final Fantasy IV -Interlude- Yang joins at level 32 and retains his Kick, Focus and Brace abilities. His abilities and function are identical to his role in the original.

In Final Fantasy IV: The After Years Yang returns as a playable party member, retaining his Kick and Focus, and now with a new Cover Counter ability that allows him to intercept attacks on an ally and counter them. Unlike Cecil's Cover, Cover Counter does not automatically defend allies. His equipment pool is similar to his original appearance. Yang has access to many Band abilities. He has the highest HP, Strength and Stamina at level 99, but his other stats are more average.

Yang's theme is "Fabul", the eponymous track that plays in his hometown.

Yang has appeared in the following games throughout the Final Fantasy series:

Yang has made key guest appearances in the following non-Final Fantasy games: 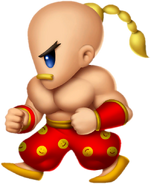 Yang's CG render in The After Years.

Yang and Ursula during the opening FMV of The Complete Collection.

Victory pose in The After Years. 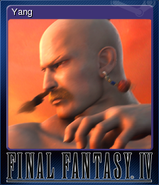 Yang's surname in katakana can also be read as Raiden. [view · edit · purge]Raiden is the Chinese/Japanese word for the physical phenomena thunder and lightning. Raijin, also called Raiden, is a god of thunder and lightning in Japanese mythology. Written in hanzi, the same deity in Chinese is pronounced "Léidiàn".

[view · edit · purge]Leiden is a German verb meaning "to suffer; to feel pain". Leiden is also a city in The Netherlands.

In Japanese, Yang's name is also pronounced identical to the name of the historical Jan van Leiden.