Yang is an enemy from Final Fantasy VII. It is the left half of the body, the right half being Ying, and the two are fought in the basement of the Shinra Mansion in Nibelheim and in the final round of the Battle Square during the time Tiny Bronco is available. When fought in the Battle Square its stats are enhanced with double the regular HP and its Attack and Magic Attack are increased by 25%.

-Abilities whose names are not shown when used are highlighted in italics.
-If Yang uses Suicide Yang, it is removed from the battle without giving the player any EXP, AP, or Gil.

Yang has high Magic Defense and powerful spells, but has low physical Defenses. After running out of MP, or it is below 1/8th of its Max HP, Yang will commit suicide dealing massive damage on one party member.

The battle can be especially hazardous on the Battle Square where the player has only one character and the best score comes from breaking one's Materia.

The player should quickly use L4 Suicide, physical attacks and Limit Breaks against Yang before it will commit suicide, and then go after Ying. When fighting the monster with a full party, the player should queue their attacks right after Yang acts to try kill it before its suicide. Using Big Guard and Regen may help on the Battle Square.

If (Ying has Death Status) Then
{ 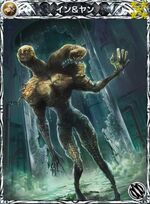 The area where Ying/Yang is fought has a seemingly two-headed skeleton on the floor. This is preserved in the Pictlogica Final Fantasy depiction

Tetsuya Nomura has said in the August 1997 issue of EGM magazine that Ying/Yang is his favorite enemy design in Final Fantasy VII.[1]

Unused enemy design for Final Fantasy Type-0.
Add a photo to this gallery

Retrieved from "https://finalfantasy.fandom.com/wiki/Yang_(Final_Fantasy_VII)?oldid=3388011"
Community content is available under CC-BY-SA unless otherwise noted.