Yamatano Orochi is an enemy fought at Whisperwind Cove on the lava and floating castle levels between floors 30 and 40. They are rare, but hit relatively hard and appear in fairly large groups. They give out lots of EXP and have a chance to drop the Braveheart weapon.

Yamatano Orochi is a boss fought at Arubboth, guarding the chest that contains the Stardust Rod. It is similar to Tiamat in that it fights using various high-level abilities such as Blaze XVI, Icestorm XVI, and Thunderbolt XVI, in addition to Poison Cloud XVI.

Orochi is a Notorious Monster member of the Hydra family. It spawns in the Mamool Ja Training Grounds - The Susanoo Shuffle. It is a less powerful version of Hydra and does not resist piercing damage. Its heads can be cut off, thought they grow back quickly.

The Serpent is an enemy and also a possible monster that the party can transform into.

Orochi is a boss fought at the Coliseum, attacking with a wide array of elemental breath abilities, including the deadly Tri-Breath skill. When low on HP, it will triple-cast the elemental abilities against the party. Defeating it will award the player with various tails and fangs. 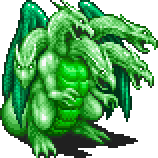 [view · edit · purge]Yamata no Orochi (八岐の大蛇?, lit. Eight-branched great serpent) was a legendary 8-headed and 8-tailed Japanese dragon that was slain by the Shintou storm-god Susano'o.