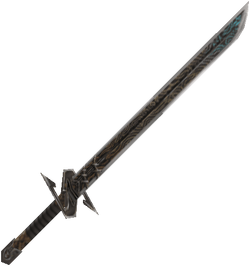 A cross-shaped throwing star used by a famous ninja school. Its blades are serrated for maximum damage.

The Yagyu Darkblade (柳生の漆黒, Yagyū no Shikkoku?, lit. Yagyū's Jet Black), also known as Yagyu Darkrood, is a recurring weapon in the series. It is usually the strongest katana or shuriken in the games it appears, or one of the strongest.

In the original version, Yagyu Darkblade is the strongest ninja sword whose license is found in the top-left section of the weapon area of the License Board, along with other ninja swords, costing 80 LP. The weapon has an Attack power of 80 and a Combo rate of 22%. Similar to other ninja swords, Yagyu Darkblade is Dark-elemental, and grants the user +20 to Evasion. Ninja swords are among the fastest weapons with 1.97s charge and 1.2s action time; only daggers are faster.

In the Zodiac versions, it is now the second strongest ninja sword, and provides 98 Attack, 24 Evade, has a combo rate of 28%, is dark-elemental, has a 20% chance to inflict Doom on a target, and requires the Yagyu Darkblade & Mesa license for 180 LP. It can be found in a chest at the Cerobi Steppe (Crossfield), and Great Crystal (Sirhru Jilaam Pratii'vaa) at Giruvegan or dropped by the Bombshell (3% chance). It can be used by the Shikari.

A powerful combination, is to wield the Yagyu Darkblade with the Black Robes that boost its damage by 50%.

Yagyu Darkrood is a throwing weapon that has the attack power of 10. They can be bought from outfitters after The Horror of Riovanes at Riovanes Castle (Chapter 4) for a 1000 gil. 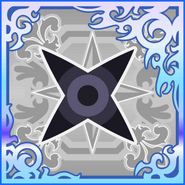 [view · edit · purge]Yagyū Munetoshi was a famous Japanese swordsman. He was a student of Kamiizumi Ise-no-Kami Nobutsuna and later became known as a master of the Shinkage Ryu school of swordsmanship. He developed and expanded upon the school's teachings, where it would be known as Yagyu Shinkage Ryu. Maxims and school focus turned to a greater emphasis on speed, reservation, free flowing movement, smaller scale duels, and the concepts of Satsujinken (lit. "Swords that Kill") and Katsujinken (lit. "Swords that Give Life"). Yagyu introduced the style to Tokugawa Ieyasu, and urban legends revolve around him teaching the style to the ninja of Iga and Koga.

It is said that the fifth generation successor, Yagyu Renyasai, established a style of sword specifications that became synonymous of the Yagyu Shinkage tradition. Regulations of sword fittings were matched of those to be followed by samurai under the command of the Tokugawa Shogunate. Fittings were to be black with subtle and modest designs. Yagyu-koshirae were said to bear shorter blades, and inserted menuki under handle areas where they would meet the palm for a tighter grip. Their tsuba hand-guards were said to have been designed with the oversight of Renyasai, who sought tsuba that did not waver under damage.