White Mage: Life's refreshing breeze, blow in energy! Cure!
This article can be improved in areas such as organization, relevancy, and NPoV.
Please refer to the Manual of Style or editing help to get started.

Various
Yagudo are a race of Beastmen in Final Fantasy XI. They are the self-proclaimed conquerors of the Mindartia continent, and created and abide by a Theomilitary system based on their ancient religion. These birdlike beastmen often have names taken from theological origins.

The Yagudo enveloped in their fanatic devotion to the living manifestation of their god. Their parish is spread wide across the Mindartia continent. They have repeatedly been at odds with the Federation of Windurst, but are currently bound by a peace treaty. A large number of Yagudo study the traditional martial arts of the East.

Locations such as Giddeus have steep cliffs cut out of rock and mountainsides and many temple towers scattered about. Although they bear a resemblance to birds, Yagudo are unable to fly. However, they can utilize the lifting power of their wings to leap high into the air and safely jump down from high places, allowing them to reach these places. When the Yagudo have prisoners, a building can be used as a jail cell from which other races have no chance of escape.

In the Yagudo Theomilitary, it's not uncommon for priests, monks and the general populace to be mixed in among hardened soldiers. This makes it difficult to get the full picture of their army's setup, and even now there is only a rough idea regarding the formation of their military. 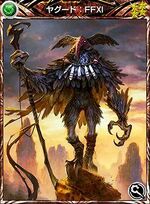 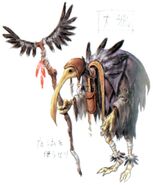 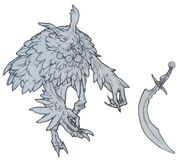 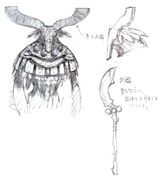 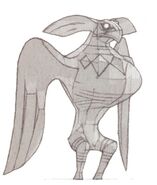 Concept art of a Yagudo Simulacrum.