Tell me, do you really think your life is worth more than the lives of millions of Cocoon citizens?

Lieutenant Colonel Yaag Rosch is a PSICOM officer and a major antagonist in Final Fantasy XIII. Though he had a hard time in the military academy, he graduated second in his class, just behind Jihl Nabaat, later becoming her right-hand man and the director of PSICOM's elite division.

His leadership skills shown in joint missions with the Guardian Corps earn him the command of the anti-l'Cie operations in Palumpolum.

Despite feeling doubt over the fate of innocents during the Purge, Rosch views the brutal and thankless task of maintaining the overall stability of society to be a soldier's sworn duty.

Colonel Yaag Rosch was an officer in the Sanctum's elite PSICOM Division.

Along with PSICOM officer Colonel Nabaat, he acted as one of the primarch's staunchest supporters. During the catastrophe, however, he chose to abort the operation ordered by the fal'Cie. Rosch redirected the military's efforts into evacuating citizens, and in doing so saved countless lives. His fate following those events is unknown, but it is assumed he was killed in action.

Rosch has silver hair, styled in thick, collar-length bangs spiked at the front and slicked down at the back, and a short ponytail tied with a black ribbon. He has sharp facial features, a thin scar above his left eye running the length of his forehead, and violet-gray eyes. He wears the standard uniform of a male PSICOM lieutenant colonel and wears a military saber on his belt. The engraving on Rosch's saber reads "RBTSKJRZZ" in the script of Cocoon. These letters are the romaji initials of the popular Buddhist mantra 臨 ・ 兵 ・ 闘 ・ 者 ・ 皆 ・ 陣 ・ 裂 ・ 在 ・ 前, which means "Come warriors, fight as one, ready in formation, line up and take position in front."

Cocoon is caught in the grip of a Pulse-born terror. If we allow l'Cie activity to continue, panic will rip our world apart.

Rosch is a focused individual set on keeping Cocoon stable and protecting it from any threats. He dislikes the fal'Cie and would be happy to see them gone, but sees no good alternative to fal'Cie rule nor a practical way of removing them. He appears cold and calculated on the outside as he hides his true feelings on the fal'Cie and rationalizes the situation to himself. Rosch devotes his life and career to the betterment of Cocoon and the protection of its citizens and sees submission to fal'Cie guidance as being in humanity's best interest, even though their "benevolence" turned out to be a farce.

He is image-conscious and short-tempered, shown when he tries to break the camera filming him while Snow and Fang are killing off his soldiers, and when he gives a melodramatic—supposed to be rousing—speech to his soldiers.

Who do you think it is terrified of Pulse and begging us to kill the l'Cie? It's not Sanctum. It's not us. It's the people.

Yaag Rosch orders every soldier in Palumpolum to eliminate the Pulse l'Cie without mercy. Rosch was given this post in part because he is thought to have a good relationship and experience with the Guardian Corps, who have been deployed in conjunction with PSICOM in Palumpolum. Rosch and his soldiers surround Lightning and Hope when they emerge from the underground, but Snow and Fang's arrival forces him to fall back. Rosch declares Palumpolum under PSICOM jurisdiction, much to the Guardian Corps' dismay, and his soldiers begin herding Palumpolum citizens to be Purged.

When PSICOM has cornered the l'Cie in Hope's residence, Snow emerges and tries to convince the soldiers what they are doing is wrong, leading them to become uncertain about their orders; Rosch, however, argues in favor of the Sanctum, saying there is no other option. Rosch reveals he dislikes the fal'Cie but follows his orders to prevent Cocoon from tearing itself apart. He argues with Snow over the Purge and the safety of Cocoon's citizens but they are interrupted when one of Rosch's soldiers throws a smoke grenade and opens fire on his squad. Rosch is injured in the attack, and the l'Cie escape with the Cavalry's aid.

Later, the l'Cie infiltrate the Sanctum flagship, the Palamecia, to subdue Primarch Galenth Dysley and save Sazh and Vanille, who are being held for a show trial and public execution. The Palamecia begins to sink due to damage caused by the l'Cie's efforts, but the l'Cie escape on board Menrva, Dysley's rukh, which assumes the form of an airship. Rosch pursues them in his personal airship, the Proudclad, and attempts to shoot them down. Menrva's powers protect the l'Cie, and allow them to bypass the shield surrounding the city of Eden, while Rosch is denied access.

When Barthandelus begins sending creatures from the Fifth Ark to Eden to wreak havoc, Rosch assumes his duties as PSICOM lieutenant colonel in addition to piloting the Proudclad in defense of the city. After tracking the party down, he fights them but is defeated. Rosch retreats in a damaged Proudclad and is later seen trying to protect Edenhall alone, despite seeing Sanctum fal'Cie turn his men into Cie'th. With a brief exchange, he attacks the l'Cie and is seriously wounded.

The Proudclad is disabled and the injured Rosch reveals that while he knew the fal'Cie were calling the shots, he did not realize their ultimate goal was to destroy Cocoon until it was too late. Finally seeing that the l'Cie are not the enemy, Rosch halts all of PSICOM and the Guardian Corps' l'Cie operations, and orders all troops to evacuate the populace. Shortly after the party enters Edenhall, a pair of Behemoth Kings descends upon Rosch. In a knowingly suicidal act, he detonates a powerful grenade to stop the creatures from pursuing the l'Cie into Edenhall.

If there were as many as four l’Cie hiding out in Palumpolum, then it wouldn’t be a surprise if the Sanctum decided to carry out another Purge. All of the residents of this city would be disposed of. The military had to make an all-out effort to exterminate the l’Cie so that the tragedy in Bodhum didn’t happen again.

During the meeting between Bartholomew Estheim and Rygdea, they watch documented footage of various events recorded by Rosch with a voice-over revealing sensitive information. Rosch reviewed the security footage from the day of the incident at Euride Gorge, depicting the Pulse l'Cie responsible: Fang and Vanille. Then the card shows footage of PSICOM troops rounding up the people in Bodhum to carry out the Purge, the military beasts, and weaponry used to carry out the massacre, and soldiers ruthlessly disposing of the people in the Hanging Edge.

Rosch's voice-over talks about Sanctum announcing the Purge as a relocation to Pulse, though its true nature was to exterminate everyone in the town in an uninhabited place on Cocoon's outskirts where the massacre would go unseen by the rest of Cocoon. As footage ranging from Lake Bresha to the Palamecia plays, Rosch's voice-over reveals the 'confirmed' assumption that the l'Cie sought to "bring harm to Cocoon", the army tracking Lightning and Hope on their journey from the Vile Peaks to Palumpolum, and the all-out military effort to kill the four l'Cie in Palumpolum to prevent another Purge from taking place. Footage of the l'Cie returning to Cocoon from Pulse and the siege of Eden plays back, and at the end of his narration Rosch reveals he knew his reckoning had come as PSICOM was heading for destruction before he faced the l'Cie one last time and sacrificed himself.

As congresspeople hold an assembly in Palumpolum's concert hall, they proclaim that both Rosch and Nabaat would posthumously be stripped of their civil rights for "bringing unprecedented calamity upon Cocoon". Rosch's footage becomes the trump card that takes down the remnants of the Sanctum and makes way for the new provisional government and the Academy.

Rosch appears as a "Quiz Rank: Lieutenant" entry for a Quiz Mastery fragment. He is noted for his actions against fal'Cie orders by commanding the evacuation of Cocoon.

Rosch pilots his PSICOM machine The Proudclad, which is fought twice in Eden.

Rosch makes a cameo in as a tutor from the in-game manuals, explaining battlegen along with Jihl Nabaat.

Rosch appears as an ability card in Mobius Final Fantasy.

Rosch appears on a Triple Triad card in the version playable via Final Fantasy Portal App.

Rosch was designed by Nao Ikeda, the supporting character designer.

The official website previously stated that Rosch was Lightning's former instructor at the Academy. This is not mentioned in the game, and the two never acknowledge knowing each other prior. 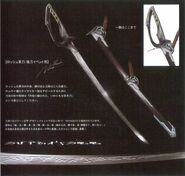 Detailed artwork of Rosch's coat.
Add a photo to this gallery 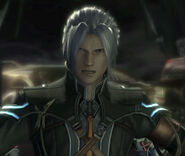 Rosch standing amidst his fallen comrades and he Proudclad.

Rosch gives his last order to all soldiers in Eden.

Rosch preparing to sacrifice himself.

16-bit Sprite of Rosch from Final Fantasy XIII online synopsis.
Add a photo to this gallery