YAT-99 is an enemy in Final Fantasy X fought in Bevelle before Yuna's wedding and after escaping from the Via Purifico.

YAT-99 can attack from long range and has attacks that either target a single party member or the whole party, the latter being magical. At long range, it will attack whomever targeted it last, or the entire party otherwise. At close range and against aeons, it will only use single attacks.

YAT-99 drops armor with any combination of up to three elemental ward abilities and weapons with Strength or Magic +3% or 5% bonuses. It is also one of the few enemies in the game that will drop Mega Phoenixes. 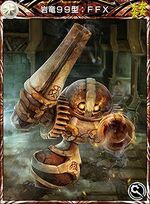 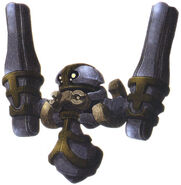 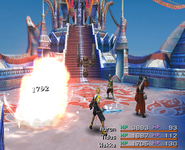 Physical attack.
Add a photo to this gallery

Retrieved from "https://finalfantasy.fandom.com/wiki/YAT-99_(Final_Fantasy_X)?oldid=3363877"
Community content is available under CC-BY-SA unless otherwise noted.