"A Magic-powered Machina used by New Yevon. Both arms are Cannons, making it an impressive piece of artillery. It's used for security inside temples, so it's never seen outside."

Cannon Attack
Nothing to learn

It is slightly stronger than its previous counterpart, but still falls victim to Lightning-elemental attacks. It is not a big threat, unless it comes in pairs.

YAC-62 can be recruited into the party by setting up a Trap pod M in either Bevelle or Luca from Chapter 3 onwards. It comes into the party knowing Ailment Def., Support Fire, Samurai Payback (which deals massive damage to one enemy), and Bombardment.

YAC-62's Agility, Magic Defense, and Luck are low, although its Strength, Magic, and Defense are high. Its Accuracy is also decent. 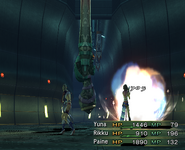 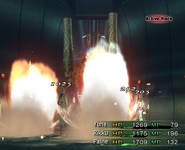 Cannon Attack (All).
Add a photo to this gallery

Retrieved from "https://finalfantasy.fandom.com/wiki/YAC-62?oldid=3164549"
Community content is available under CC-BY-SA unless otherwise noted.