Summon ancient demons to wreak havoc on your foes.

The Yōkai (妖怪, Yōkai?) is an asterisk that appears in Bravely Second: End Layer. It is obtained after defeating Yōko.

The Yōkai is an alternative take on the Summoner job, focusing on summoning the seven sin beasts to use their powerful abilities while having excellent statistics all around. With their Diabolism abilities, the Yōkai can decimate enemies in various ways, and with their innate ability Echo, their spells have a chance to repeat themselves with no cost. Their Awakening support ability also allows the player to reach the eleventh level of every job they have unlocked.

The Yōkai's specialty is Echo. Its job command is Diabolism.

Yew as a Yōkai.

Edea as a Yōkai. 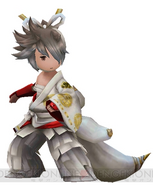 Tiz as a Yōkai.

Yōko, wielder of the Yōkai asterisk.
Add a photo to this gallery

[view · edit · purge]Yōkai (妖怪?) are a class of supernatural monsters, spirits, and demons in Japanese folklore. The word yōkai is made up of the kanji for "bewitching", "attractive", "calamity" as well as "specter", "apparition", "mystery", "suspicious".

The "Seven Sins" in the Diabolism skill refer to the "seven deadly sins".

Their depiction by the use of fox themes have their roots in both Japanese and Christian myth and demonology; regarding the former, kitsune were reputed to be able to transform their appearance as they pleased and could attain godhood by living long enough to gain nine tails, while the latter features them as a creature said to be the embodiment of the Devil, and in depictions of The Last Judgement, are said to be the beast who leads the infernal tribes of Gog and Magog through an opening within the Iron Gates of Alexander to ravage and terrorize the world.