Y'shtola's default player name is Nameless Scion. Her manikin counterpart, the Mirage of a Conjurer, is aquamarine.

Y'shtola's default outfit, "Scion of the Seventh Dawn", is her original appearance in Final Fantasy XIV: A Realm Reborn. She has tan skin and white hair, and wears a white dalmatic with blue trousers. This costume has two alternate colorations. The one based on her half-sister Y'mhitra recolors her dalmatic cyan with gray patterns, her trousers black, and her shoes white. Another recolors her dalmatic black with brown patterns, her trousers black, and her shoes brown with red laces and soles.

Her first alternate outfit, "Scion Healer's Robe", is her main appearance from Heavensward and Stormblood. She wears a long-sleeved white dress top with red accents, black shorts with black thigh-high boots and a black bolero shrug over her shoulders. Her hair has slightly longer pigtails in the front, and her eyes are pale white. This is also her main attire in the story of Dissidia Final Fantasy NT. The first alternate coloration recolors her dress top red with white accents, while the second recolors her dress gray with blue accents.

Her second alternate outfit, "Scion Sorceress's Robe", is her main appearance from Shadowbringers onwards. The first alternate coloration changes her robes to red and her fur black, making it resemble a Red Mage's attire. The second alternate coloration recolors the main dress to a dark shade of blue, the feathers a leaf green and her brooch purple, making the ensemble more closely resemble the Seventh Hell attire from Final Fantasy XIV: Stormblood, a gear set awarded to Level 70 Black Mages.

Scion of the Seventh Dawn I.

Scion of the Seventh Dawn II.

Scion of the Seventh Dawn III. 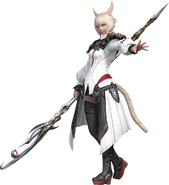 Scion Sorceress's Robe III.
Add a photo to this gallery

Y'shtola equips wands and rods. Her weapons can be used by Conjurers in Final Fantasy XIV, while the Truth Seeker is exclusively wielded by her from Heavensward onwards. 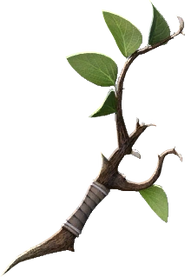 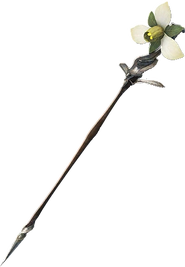 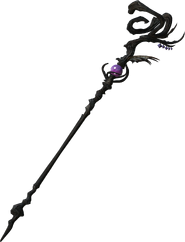 Y'shtola's Nightseeker.
Add a photo to this gallery

Y'shtola is transported to World B by the new goddess of harmony, Materia, as one of her chosen warriors. Although new to this world, Y'shtola calmly adjusts to her situation and quickly finds her fellow warriors heading to Materia's domain, spotting Squall Leonhart and accompanying him on the way. Materia informs Y'shtola and the other champions that they must fight each other to produce enough energy to sustain the existence of this world. After their meeting is interrupted by Spiritus, Materia orders her champions to fight his forces.

After being dismissed by the goddess, Y'shtola meets up with the Onion Knight and Vaan, who kindly welcome her to the fight. Fascinated by the inner workings of World B, she steps through one of the portals. They find themselves in Midgar, a place that none of them recognize, but speculates that their presence and the memories they carry from their home worlds allowed this realm to take form. They press forward through another portal, and find themselves in an imitation of Rabanastre, Vaan's home.

Y'shtola and her group encounters Kefka, who is destroying the city out of boredom. Onion Knight introduces him to Y'shtola as a villain he crossed paths with in the previous war, and the three fight him and his manikin companions. Doing this triggers the planesgorgers to descend upon the realm and consume it, causing the group to flee as Y'shtola grows more concerned about the world's stability. They meet up with Terra Branford, Squall, Zidane Tribal, and Lightning, and inform them of the planesgorgers' presence. After learning about the resident Eidolons from Terra and Zidane, the two groups return to Materia.

After the two gods form a truce, the champions on both sides engage in a stage battle to lure out Shinryu, the source of the plangesgorgers. In the ensuing fight, Y'shtola protects Terra, who was facing off against the Cloud of Darkness and Ultimecia, with her Aetherial Pulse against Cloud of Darkness's particle beam. They brace themselves as Ultimecia and Cloud of Darkness combine their powers into one powerful spell, but Shantotto saves Y'shtola and Terra with her own spell. Once the battle energy summons Shinryu, Y'shtola participates in a joint attack against the dragon, but is repelled as Shinryu reveals his true form in a potent burst of power. Once the warriors regain their composure, they work together to defeat Shinryu.

The moogles give Y'shtola a crystal to host her memories for Materia to use in the new cycles of wars. With a crystal doppelgänger of herself to serve on Materia's behalf, Y'shtola is sent home.

Type: Marksman - Y'shtola possesses spells that both damage and debuff her foes, and with correct timing, her Bravery attacks can be canceled into each other.
EX Skill (Conjurer): Aetherial Pulse - Hold

to generate an aura that restores HP and Bravery to any allies within it.
EX Skill (Thamaturge): Foul - Press

to erect a large field of dark energy that absorbs Bravery. Hold down the button to extend its radius.

Following the Version 1.22 rework, Y'shtola received the most drastic of changes, gaining a new moveset that discards her Arcanist spells in favor of being able to change between Conjurer and Thamaturge.

Y'shtola was chosen to represent Final Fantasy XIV because she is recognizable, can fight, and has some individuality in her skills. Minfilia and Gaius van Baelsar were also considered, but Y'shtola was selected because she has not appeared in many games.[1] 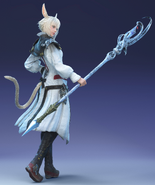 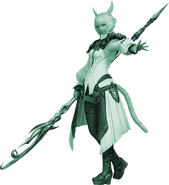 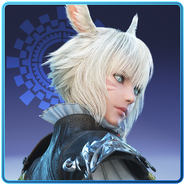 Y'shtola from the tutorial.

An early screenshot of Y'shtola.

A presentation screenshot of Y'shtola.

Y'shtola with the Warrior of Light and Onion Knight.

Y'shtola as she appears in the announcement trailer for Dissidia Final Fantasy.

Y'shtola alongside the other 14 main characters.
Add a photo to this gallery