The Xiphos is a fiend in Final Fantasy X found at Macalania Woods. It has relatively high HP and is fairly agile, but is not difficult to beat. Xiphos will target a random party member and continue attacking them until they're switched out or KOed. Against Valefor, it will do nothing.

Xiphos will drop weapons with SOS Overdrive or Magic/Strength +3%. It will also drop armor with Defense +5%.

Enemy is Tough.
Defense and Magic Defense are 90 during a Butterfly Hunt. 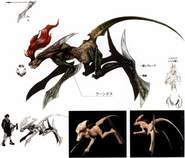 [view · edit · purge]A xiphos was a type of double-edged sword used by ancient Greeks. The blade was generally used a secondary weapon once the user discarded his spear or javelin for close combat.

Retrieved from "https://finalfantasy.fandom.com/wiki/Xiphos_(Final_Fantasy_X)?oldid=3363705"
Community content is available under CC-BY-SA unless otherwise noted.