A precocious brawler, whose cheerful demeanor belies her prodigious gifts in the martial arts. Dressed in garb passed down by her ancestors, of whose line only her family remains. Though Xiao herself does not speak of it, it is believed she chose the warrior's path out of a wish to protect her heritage with her own fists.

Xiao is a character and summonable unit from Final Fantasy Brave Exvius. A famous monk hailing from the Kingdom of Pharm, her vision can be summoned by Rain and Lasswell to aid them in their battles.

Originally an inhabitant from Pharm,[1] Xiao inherited her family's fightning techniques passed from parent to child for generations before her. A genius martial artist, she mastered the techniques at a young age. Xiao dressed herself in a garb passed down by her ancestors, of whose line only her family remained.

Although at the time of her life many saw martial arts as dangerous relics from an arcane age, Xiao used her skills to help the weak and defenseless. With her cheerful, likeable demeanor, and using her power only to protect, she changed how martial arts were viewed around the world. She reversed years years of prejudice against the martial arts, and left a lasting legacy: it is thanks to her that monks around the world now value kindness and consideration above all else.

Following her death, Xiao left behind a crystal with her memories, to be summoned by those with the power of visions. Though Xiao's tribe has died off, those who inherited her legacy and techniques are held in high regard thanks to her.

Xiao's job is listed as Monk. A 3-6★ Rare Summon, Xiao has two main roles in battle: Physical Damage and Support. Her Trust Master reward is the Kaiser Knuckles – a wind-elemental fist weapon with an ATK power of 101. She has no natural element or status resistances, and can equip only Fists as weapons, and Hats and clothes as armor. She can also equip accessories.

Xiao's 6★ form is available only in the Global version of the game. Her awakening materials are as follows:

Xiao' stats at her highest levels are as follows (with no passive abilities taken into account), along with the maximum amount of stat points that can be increased through pot-enhancements: 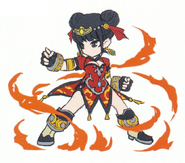