Xezat Matias Surgate, originally romanized as Zezae, and known as Zeza in the Anthology and unofficial RPGe translations, is a non-player character in Final Fantasy V. Xezat is one of the four Warriors of Dawn.

Xezat has blond hair. He also sports a beard and a mustache. In his official Yoshitaka Amano artwork, he wears a blue and white full body armor and has his sword sheathed by his left leg. His helmet features two horns. In his field sprite, his armor and helmet is mostly of the light shade of green.

Xezat is of humble nature, never getting accustomed to life as King. He instead refers to himself as the swordsman, Xezat. He places his full trust on the party when he asks them to destroy the Barrier Tower protecting Castle Exdeath with him.

Xezat is one of the original Warriors of Dawn, along with Galuf, Dorgann, and Kelger. When he returned to his own world, after having defeated Exdeath, he became the king of Surgate.

Much like Galuf, he could never get accustomed to the life of a king and so always addresses himself as "The swordsman, Xezat". Xezat sacrifices his life to allow the Warriors of Light to destroy a Barrier Tower upholding a barrier around Castle Exdeath. His death has a great effect on Galuf.

When the party faces Exdeath in the Interdimensional Rift, the warlock sends them inside the Void. The spirit of Xezat, together with those of the other three Dawn Warriors and King Tycoon, helps the party escape, allowing them to defeat Exdeath once and for all.

An Auri man resembling Xezat, currently just referred to as "Rational Youth," appears alongside the game's version of Galuf and two others resembling the Dawn Warriors.

Xezat is a playable character who could be initially recruited during the Challenge Event Warriors of Dawn - Enduring Bonds as a First Time Reward for completing the event's Barrier Tower stage. 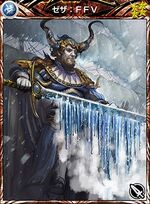 Cite error: <ref> tags exist, but no <references/> tag was found
Retrieved from "https://finalfantasy.fandom.com/wiki/Xezat_Matias_Surgate?oldid=3231691"
Community content is available under CC-BY-SA unless otherwise noted.