Mine is the power of darkness! Even the stars must bend to my will!

What worth is wealth and power when all must inevitably be consigned to nothingness? If man has nothing, he need not know the pain of loss. So let there be nothing. Harvest more power, that the gate may be thrown full open. Let the Cloud of Darkness come and engulf the world, devouring all life, hopes, and dreams. Let all be returned to nothingness.

Xande about to decide the fate of the world.

Xande was the founding emperor of the Allagan Empire who desired to expand his dominion prior to death. Though he conquered much of the known world, he could never bring Meracydia under Allagan dominion. Ages later, a brilliant scientist and magician named Amon used the technologies of his people to resurrect Xande within a clone body to restore their empire to its former glory. The reborn Emperor, seeking to fulfill his ambitions from his previous life, made a pact with the voidsent of the World of Darkness. With this might, Xande's forces finally subjugated Meracydia, while guidance from the Ascians allowed Xande to capture the dragons' primal Bahamut. He was thus contained within the space station Dalamud and placed in orbit around the planet to collect solar energy.

However, Xande sees the pointlessness of existence and decides to establish the pact in a way that the Cloud of Darkness would wipe out all of Eorzea. As rebellion against his tyranny mounted, Xande ordered that Dalamud transmit all of its energies to force the Voidgate open. Unable to hold the energy received, the Crystal Tower leaked it into the ground and caused a colossal earthquake that brought his empire to utter ruin, and thus began the Fourth Umbral Era.

Though the events of the Fourth Umbral Calamity buried Xande alive within the Crystal Tower, he returns after the Seventh Umbral Era unearths the Crystal Tower in response to Dalamud's descent. As part of the Crystal Tower story arc, the Warrior of Light (Final Fantasy XIV) leads a campaign to stop Xande and negate his pact with the World of Darkness.

You fight valiantly, mortals, but to no avail. Absolute darkness draws nigh. Soon it will be unleashed, and all shall return to nothingness!

After Xande's final death, a clone of him appears later during NOAH's raid to the world of darkness.

Heed me, Amon. No matter how vast one's empire, or full one's treasure vault, all is rendered meaningless by death. In the end, all is lost...

Though Xande was defeated, his desire to end all life was not forgotten by his servant Amon. Amon received the title of Fandaniel, one of the members of the Convocation of Fourteen, from Emet-Selch. When all the Ascian paragons, Emet-Selch, Elidibus and Lahabrea, were defeated, Fandaniel intended to carry out Xande's desire to end all life, and thus Fandaniel orchestrated events to re-enact the Final Days, which had nearly destroyed Etheirys in the past, until the Convocation summoned the elder primal Zodiark to avert the calamity. Fandaniel sought to have Zodiark destroyed, and eventually succeeded. However, his and Xande's final vision was eventually averted, when the Warrior of Light chosen by Hydaelyn defeated the source of the Final Days, Meteion.

Xande has white hair, white pupiless eyes, and dark blue skin with golden yellow markings and red forearms. He appears with great muscle mass, shown by his exposed upper body, wears a blue cape, orange pants, an orange and blue sash wrapped around his waist with a demon shaped buckle at the top-center of it, and brown boots. During battle, the lines on his body glow blue, similar to Amon's outfit.

Compared to Yoshitaka Amano's design for the original Xande in Final Fantasy III, this version appears much more rugged and aged. His facial features are somewhat reminiscent of Highlander Hyurs and Roegadyn.

Though I may have defeated death, it did not leave me unscathed. Nay, its ravening claws have scarred my soul for eternity. Never shall I know peace. Beings without will. You cannot fathom my rage. My melancholy. My fear.

While he initially exhibits a very confident and assertive tone during battle, an Echo flashback from late in his reign shows he was pensive and brooding despite having finally conquered Meracydia. He confides to his soulless clone servants that the process of dying and being revived left him spiritually scarred, having realized his accomplishments in life is destined to fade away after death. This nihilistic view ultimately led to his decision to reduce the world to nothingness.

Emperor Xande is featured as the final boss of

"Tumbling Down" plays during the battle with Xande. It is a rearranged version of "Battle 2", the boss theme from Final Fantasy III.

Xande is voiced by Peter Bramhill in English and Kenichiro Matsuda in Japanese. 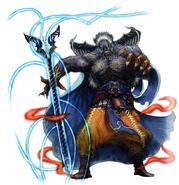 Artwork of Xande along with the other bosses of the Crystal Tower.

Xande ready to fight the Adventurers.