Final Fantasy Wiki
Register
Don't have an account?
Sign In
Advertisement
in: Non-player character other appearances from Final Fantasy III 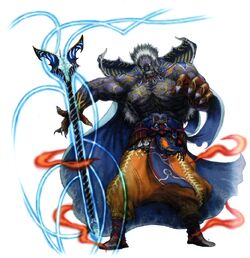 What worth is wealth and power when all must inevitably be consigned to nothingness? If man has nothing, he need not know the pain of loss. So let there be nothing.

In the Crystal Tower dungeon's storyline, Xande is rebooted as the Allagan emperor Xande, and serves as the boss of Syrcus Tower.

Emperor Xande reigned in the period during which ancient Allag reached the apex of its civilization. After his death though, Allag slowly faded in decay, the achieved wealth becoming a burden since it couldn't self-improve any more. Seeking to the restore empire's former glory, the famed scientist Amon developed a technique to clone people, by which he achieved to bring back the formerly deceased Xande in the form of a clone, which retained his past life memories.

For a brief period, the resurrected Xande brought indeed a new period of prosperity of Allag, but the scars of death left their mark. Soon after the Emperor started fearing death again. In an attempt to achieve immortality, he sought control of the power of Darkness. He shut the Crystal Tower, in an attempt to use the amount of energy it produced for its means. The tower's energy was not enough though, it was then that Dalamud was created and launched in space to power up the Crystal Tower. Plans didn't go accordingly though, and the sudden burst of energy triggered a calamity which led to the Fourth Umbral Era. In attempt to amend for their father's doing, and to protect future generations, Emperor Xande's former children, Unei and Doga, left their wills to two of their own clones, while the tower was being frozen in time by the calamity.

Many years later, following the fall of Dalamud, the Crystal Tower was once again brought to surface and thus Xande, Unei and Doga's clones awakened. After the NOAH committee managed to breach the Labyrinth of Ancients, the clones joined them and opened the doors of the Syrcus Tower, hoping that the Warrior of Light could stop emperor Xande.

After the fight with Xande, a rift to the Void is opened, and it is then revealed that, driven mad by the fear of dying, Emperor Xande had made a pact with a mysterious voidsent called Cloud of Darkness to bring about the end of all life. As clones of the royal bloodline, Unei and Doga attempt to annul Xande's pact, but they are instead pulled into the rift along with Nero tol Scaeva as the Cloud of Darkness insists that the bargain will be upheld.

Xande appears as a playable character.

From Great Magus Noah did Xande receive the gift of a mortal life, a gift which was most unwelcome. Desiring immortality and power, Xande trespassed into darkness, never realizing the true value of his gift...

Xande appears as an enemy during Battle Music Sequences.

Xande appears as a boss-type enemy in Battle Music Sequences. 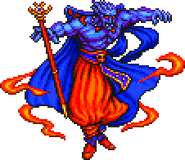 Xande appears as an enemy during an event called "Shattered World". In battle, Xande uses Meteor. 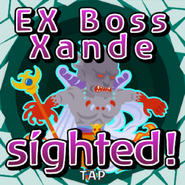 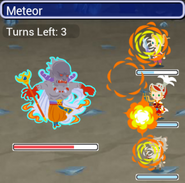 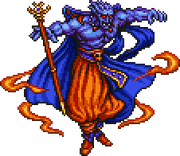 Xande appears as a card and is part of the Fire set.