Xande's Clone, abbreviated as ZandeCln. in the NES fan translation, is a boss in Final Fantasy III. Four of them guard chests containing Ribbons in the World of Darkness.

Attacks twice per round.

Xande's Clone is a weaker version of Xande. For the most part, he wastes turns casting Libra; however, he is capable of using Flare, Quake, and Meteor. Dispatching him quickly is a must. Bio and Quake can deal high damage to him. In the NES version, Xande's Clone is vulnerable to several instant-death and status spells, including Warp, Mini, and Shade. He is immune to the Toad and Confuse spells, however. 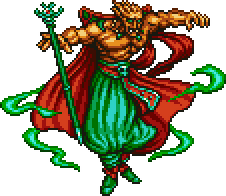 [view · edit · purge]In biology, cloning refers to the natural or artificial process of producing similar populations of genetically identical individuals. The term is derived from the Ancient Greek word κλών klōn, "twig", referring to the process whereby a new plant can be created from a twig.

More generally, the word "clone" means a duplicate or copy of something.

Retrieved from "https://finalfantasy.fandom.com/wiki/Xande%27s_Clone_(Final_Fantasy_III)?oldid=3238748"
Community content is available under CC-BY-SA unless otherwise noted.