Once you are gone, eternal life will be mine!

Xande, when the Warriors of Light confront him.

Xande is the main antagonist of Final Fantasy III. He is a powerful wizard and student of the Great Magus Noah. When his master gives him the gift of mortality, the thought of dying sends Xande over the edge. Although he is mentioned several times in the course of the game, he appears in person only once, when the Warriors of Light battle him.

Xande has white hair and dark blue skin with bright yellow eyes. He appears with great muscle mass shown by his exposed upper body, he wears a white cape (blue in the 2D versions), orange pants, an orange and blue sash wrapped around his waist with what appears to be a cat-shaped buckle at the top-center of it, and brown boots.

Xande is misguided and may not care for anything but his own survival. He is also implied to be nihilistic as a result of his fear of death, due to his intention to cover the world in darkness to ensure death cannot happen.

Master Xande was originally one of Great Magus Noah's students, along with Master Doga and Master Unei. Noah bestowed Doga and Unei with great magical powers, but gave Xande a much stranger gift, the gift of mortality. Xande was driven mad by the thought of dying, and in a blind rage, he sought to disrupt the balance of light and darkness by draining the crystals of their power. By doing so, the world would be flooded in darkness and time would freeze. Thus, he would no longer have to fear death.

Xande set up base in the Crystal Tower, and successfully drained the Earth and Water Crystals. This created an imbalance of power, summoning a tide of darkness to cover the world. A portion of the world was ripped from the planet and sent into the sky above the tide, as time froze on the surface world. The two remaining crystals were on this new floating continent, but it mattered not to Xande: the surface was frozen, and immortality was his again. However, he became wary of the prospect that the floating continent's residents might some day return to the surface, and began sending monsters there to try to destroy the continent.

When the Warriors of the Light manage to dispel the tide of darkness, they confront Xande in the Crystal Tower. He has managed to drain all the crystals now, but the tide of darkness has not returned. Though Xande catches them with the curse of the five wyrms, the Warriors are rescued by the appearances of five pure souls. Without any more tricks to use, Xande fights the Warriors of the Light and is killed, but his actions have had an unknown side effect. By creating such a huge imbalance in light and darkness, the Cloud of Darkness appears, revealing that it was commanding Xande all along wanting to return everything to nothingness.

Xande is mentioned by a Gulgan in Replito when it is stated that someone is attempting to create an imbalance of light and darkness, not knowing that this will destroy the world.

Xande is fought as a boss on the top of the Crystal Tower. Recolored versions called Xande's Clones appear as enemies in the World of Darkness.

Xande has made appearances in the following games in the Final Fantasy series:

There is a battlegen called "Xande's Hatred" found in the Crystal Tower in Dissidia 012 Final Fantasy.

An early list of of monsters designs made during the planning stages of Final Fantasy III described this character as being "a cold and beautiful woman."[1] 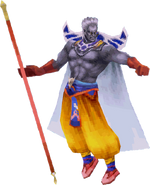 Xande in the past 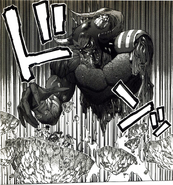 Xande after getting wrecked

Xande is possibly a shortened form of Xander, which in turn is derived from the Latin Alexander and Ancient Greek Aléxandros, meaning "defender of men". Since humans are naturally mortal, Noah's gift could be seen as appointing Xande to protect the innocent to their natural death.