The XIVth Imperial Legion is a legion of the Garlean Empire levied by "The Black Wolf" Gaius van Baelsar in Final Fantasy XIV.

After successfully capturing Ala Mhigo, the XIVth Legion was poised to annex the rest of Eorzea. As next part of their invasion plan, the legion attempted to capture Mor Dhona due to Lake Silvertear believed to be a nexus of aetherial energy (and therefore a risk of fueling primal summonings in defense of the realm). What Garlean scholars failed to take into consideration was the legends surrounding its guardian: as the fleet moved into Mor Dhona airspace, the Father of Dragons, Midgardsormr, emerged from the lake. After centuries of absence, the king of kings called forth the Dravanian Horde with song to repel the Garlean fleet. Even the mighty Agrius super-dreadnaught could not withstand the terrible power of Midgardsormr's energy blasts, and it fell into the lake with the great wyrmking coiled around it. The ceruleum fuel tanks ignited, killing Midgardsormr and destroying the seal on the flow of aether at the lake, creating a blinding pillar of light.

With the loss of the Agrius, Gaius was forced to withdraw the surviving fleet to Ala Mhigo. Worse yet, the breaking of the seal gave the native beast-tribes an abundant supply of aether to summon their primals in response to both the Garlean invasion and disputes with the city-states. For ten years, the invasion of Eorzea was put on hold, beginning the Age of Calm.

Emperor Solus zos Galvus, seeing the crisis in Eorzea, approved of Nael van Darnus's more extreme plan: Project Meteor. In response to the implications of this threat, the city-states reinstated the Eorzean Alliance and recreated the Grand Companies. Gaius and his Legion were ordered to aid van Darnus with his plan. However, the Legatus did not approve of his peer's apocalyptic plans, and secretly aided the Eorzean Alliance in their efforts to thwart the White Raven.

Although the Emperor abandoned any plans for Eorzea after Project Meteor was less than successful, Gaius van Baelsar would not give up his ambition to bring Eorzea under his control. With the aid of a spy planted in the Grand Companies by High Legatus Varis yae Galvus, the XIVth Legion quietly set up several outposts in Eorzea in the years after the Calamity.

In addition to reusing Nael van Darnus's old fortress Castrum Novum (now called Castrum Centri), the Legion set up a major stronghold at Northern Thanalan, as well as additional bases in La Noscea, the Black Shroud, and Coerthas. They also performed research expeditions into the Binding Coil of Bahamut at Castrum Occidens, as well as a Provisional Research Camp in the wreckage of the Agrius. Nero, Livia, and Rhitahtyn would separately set out to spy on the Warrior of Light, an adventurer rising in fame that posed a threat.

The XIV Legion would eventually come across an anti-primal weapon unearthed at Ala Mhigo: the Ultima Weapon, Gaius hoped to subjugate the city-states and beast-tribes. The Ascian Lahabrea was also pursuing the Ultima Weapon, wanting it's power core, the Heart of Sabik, the cause a Calamity as part of the process to awaken his God, Zodiark. Lahabrea established an alliance between the Ascians and the Garleans, secretly intending to betray Gaius by using Ultima., a power stored within the Heart of Sabik, to cause another Calamity.

Though the beast-tribes backed down, the Eorzean Alliance responded to his ultimatum with Operation Archon: a tactic to cut off Gaius' supply lines and besiege all of his bases. The XIV Legion would be dealt it's first severe blow when Rhitahtyn was assigned command of the imperial outpost at Cape Westwind, only to be assassinated by the Warrior of Light. Another high-ranking Imperial, Aulus rem Vulso, would also be assassinated while observing warmachina wreckage.

Soon after, the Warrior of Light led an assault on Castrum Meridianum to destroy the Praetorium's shiled generators. The assault was successful, with Livia slain while defending the Praetorium. The Warrior and their allies them stormed the Praetorium itself and defeated Nero, who managed to escape alive. Gaius confronted the Warrior himself, but was outmatched and retreated into the Ultima Weapon. Due to intervention by Hydaelyn, the Warrior destroyed the Ultima Weapon, leaving Gaius to presumably perish in the explosion. Lahabrea himself was defeated by the Warrior soon after, putting an end to Gaius' conquest of Eorzea.

After Varis zos Galvus becomes the Emperor of Garlemald, the remnants of the XIVth Legion are absorbed into the forces of the succeeding XIIth Imperial Legion as well as the reformed VIIth. Gaius later reveals that he survived the Praetorium's destruction and lives on as the Ascian-hunting mercenary "Shadowhunter".

"Steel Reason" plays in all the battles against the tribunes of the XIVth Imperial Legion, except for Gaius, who has his own battle theme, "Bite of the Black Wolf".

An unfinished Garlean outpost can be seen from near the Monument Tower in the Coerthas Central Highlands. According to a developer interview,[citation needed] it was to be called Castrum Aquilae and was abandoned due to the extremely cold weather that gripped Coerthas. 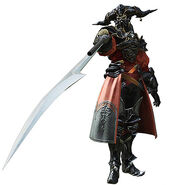 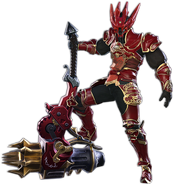 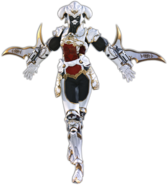 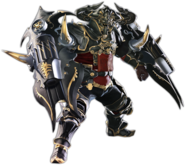 The XIVth Imperial Legion is inspired by the Legio XIV Gemina, the legion of the Roman Empire levied by Julius Caesar in 57 B.C.