X-ATM092, also known as Black Widow (ブラック・ウィドウ, Burakku Widō?) is a boss in Final Fantasy VIII. It is a massive spider-like robot activated by Biggs to pursue the player party as they leave the Dollet communications tower with a timer active. The party must attack it until it collapses and enters self-repair mode, and it is advised to take this opportunity to flee, as it cannot be defeated at this point. From then on, X-ATM092 will chase the party; it is possible, albeit difficult, to avoid the encounters. If it catches up with the party, they are forced to fight it again.

Upon reaching the beach, X-ATM092 is destroyed in an FMV. It is possible for the player party to defeat the robot in battle themselves, and doing so earns 100 bonus points in the SeeD exam report upon graduation. The player's "attitude" rating on the report is also affected by certain actions during the chase: The player will incur a penalty if they do not shoo the dog in the town square out of the robot's path, and hiding in the pub as X-ATM092 passes by will also deduct points. By defeating the robot in battle or hiding in the pub, the player will not view the FMV when they return to the beach.

Galbadia's mobile attack weapon, AKA "Black Widow". Doesn't stop until it kills all enemies in its path.

-If its HP is reduced to zero, it is automatically replenished, but the player still receives items and AP. X-ATM092 can only do this a certain amount of times per fight.
-Renzokuken always does 4 hits.
-The Mug item cannot be obtained as the party does not have Mug yet.

After escaping the initial fight with X-ATM092, it is possible to evade it entirely. Atop the cliff where Selphie jumped down to follow Seifer, the party must cross as fast as they can. When descending the mountain trail, the party must walk past a small portion of the path. If they run, the ground will begin to shake and X-ATM092 will catch up.

On the bridge, the party must proceed until X-ATM092 jumps over them, then run the other way until X-ATM092 jumps over them again. If the player turns back too soon, X-ATM092 won't jump over a second time and will eventually catch up. By giving it space to make the second jump, the player can then turn again as soon as they hear the jumping sound effect and exit the bridge to the town square.

After sustaining 20% damage of its overall health, the robot will fall and begin repairing. Zell will prompt the party to flee, or Squall if Zell is incapacitated, or Selphie if both are. If the player waits for X-ATM092 to recover to full health, they will lose their chance to flee and must continue fighting until it falls again. It is not possible to defeat X-ATM092 in the initial battle, as it can self-repair an infinite amount of times.

Although X-ATM092 can repeatedly repair itself, it can only do so up to five times in a single battle, and eventually will not collapse again, a sign it will no longer repair itself and can be destroyed. Due to its high HP and the time limit, destroying X-ATM092 is difficult. All five self-repair sequences must occur in the same battle.

If the player defeats X-ATM092, they will receive both 50 AP and a random GF ability item (either Str, Vit, Spr or Mag+40%). Random encounters will also be enabled.

It is advised to evade X-ATM092 until nearer to the shore to maximize the Spirit score portion of the SeeD exam, as only one mandatory escape is allowed for the first encounter. This will minimize random encounters as well if it is destroyed by the party.

After the initial battle, X-ATM092 will only self-repair five times until it can be destroyed. This means the party needs to remove 20% of its HP five separate times to trigger the self-repair sequences, then inflict 100% of its HP a final time to destroy it. Alternatively, the party needs to deplete its HP a total of three times in any battle before the self-repair sequence can be completed to destroy it.

The potency of X-ATM092's attacks can be halved by draw-casting Protect on the party. To defeat X-ATM092, it is recommended to draw Doubles from Elvoret and use them in the battle against X-ATM092 to Dualcast Thunder. It is also possible to obtain higher level Thunder magic by teaching Quezacotl T-Mag RF and refining items, such as Dynamo Stones obtained by playing Triple Triad and modifying Blitz cards, or Coral Fragments obtained from Creeps cards.

If the player has no higher level magic, Thunder will work. Selphie is probably the party's best magic caster, who should be given a Guardian Force with Mag-J.

If Quezacotl knows the Boost ability, a boosted summon can exceed 1,000 damage. However, the time-limit must be kept in mind; if Quezacotl hasn't learned too many SumMag+ abilities, dualcasting Thunder magic will deal more damage, and is much faster. It might work better not to summon Quezacotl at all, and only use Limit Breaks and dualcast Thunder. If the player is lucky, Selphie's Slot will turn up Thundara, Thundaga, or even Holy, Meteor, and Ultima, which can do massive damage. The End will not work while X-ATM092 can still repair itself; instead of killing it, The End will make X-ATM092 collapse and start repairing.

A good way to prepare for the battle is to train Quezacotl on the Balamb beach, fighting Fastitocalon-Fs for 3 AP each until it knows Boost and SumMag+30%, before leaving for Dollet. Having a compatibility of 800 or higher helps as well. Any summon at 255% boosted value will be able to do enough damage to trigger the self-repair sequence in one hit, but this is typically only possible with a turbo controller, macro, or some other aid, as normal button-pressing is not fast enough to boost summons that high.

The mission timer and the self-repair sequence timers work differently to the ATB gauge. The former counts down even if the player is in the menu screen, except when the game is paused during battles. The self-repair timer will not count down when the ATB gauge is paused during certain animations (such as a draw animations or GF-summon-animations). To avoid unnecessary delays, it is recommended to not queue more animations than necessary to trigger the self-repair sequence, as one could be stuck waiting for a GF summon to finish when it is already knocked down.

Junctioning Lightning-magic to Squall and/or Zell's Elem-Atk-J is useful, as X-ATM092 is weak to it. This will not boost Limit Break damage, however.

X-ATM092 is a Level 6 Boss Card in Triple Triad used for playing the minigame and for turning into Turtle Shell (2:1) with Quezacotl's Card Mod. It is a rare outcome of successfully Carding an SAM08G or a Red Bat. 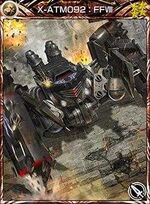 X-ATM092 is the first of two enemies to award a SeeD rank when defeated, the other being Ultima Weapon.

Later in the game, if the player tries to return to the Dollet communications tower, a Galbadian Soldier will call two robots identical to X-ATM092. The first one (RoboVite 001) falls off the cliff, and the second (RoboSharp 002) falls from the mountain path, entering the screen in an upside-down position, blocking the path to the tower.

The boss is called X-ATM082 in the Final Fantasy VIII PlayStation demo. Some of its attacks have different names (Clash is called Charge and Arm Crush is called Claw Crush) and defeating it is considered impossible due to the weaker party and stricter time limit. The player also cannot hide in the pub.

X-ATM092's field entity reference in the game's data is kani from the Japanese word for crab (蟹, kani?).

It has also been known as Black Widow. [view · edit · purge]Latrodectus is a genus of spider in the family Theridiidae, many of which are commonly known as widow spiders. Individual species vary widely in size, but in most cases the females are dark and identifiable by reddish hourglass markings on the abdomen. The spiders' venomous bite is considered particularly dangerous because of the neurotoxin latrotoxin, which causes the condition latrodectism, both named for the genus. The female black widow has unusually large venom glands and her bite is particularly harmful to humans.