A legendary lance instilled with the spirit of the wyvern.

Wyvern Lance (飛竜の槍, Hiryū no Yari?), also known as Dragon Lance and Wyvern Spear, is a recurring spear in the series. It is often a powerful, if not the strongest, spear in the games it appears in, boosting high attack power and often gives damage bonuses against Dragon-type enemies.

The Wyvern's Lance is the strongest spear only equippable by Ricard, and can only be found in Arubboth. It boosts an incredible 169 Attack power, and also grants +99 Strength and Agility.

The Wyvern Lance (also called Dragoon Spear) is a rare weapon for Kain. It can be dropped from Blue Dragons, Red Dragons, and Crystal Dragons. The Wyvern Lance does additional damage to dragons, and provides 99 Attack and 30 Accuracy. This weapon is metallic.

In the 3D versions, it has an attack power of 110 with an accuracy of 100 with the same properties as the 2D versions. Kain can equipped this spear.

The Wyvern Lance is the second strongest spear, providing 110 Attack and 30% Accuracy, as well as dealing extra damage to dragon-type enemies. It can be dropped by Blue Dragon, Red Dragon, or Crystal Dragon. The Dragoon Lance is a spear that is initially equipped by Kain after he becomes a Holy Dragoon, and provides +3 to all stats, 80 Attack, and 40% Accuracy, as well as being Holy-elemental.

The Dragon Lance is the strongest spear (second strongest in the Advance version) and does double damage to dragon-type enemies. It can only be stolen from Jura Aevis or Crystal Dragons, and provides 116 Attack and 119 Accuracy.

A heavy spear with the force to stagger enemies, making their defenses crumble. Rank: Basic

The Wyvern Lance is a basic rank spear-type weapon for Lightning. It provides Strength +220, Magic +120, Stagger Power +15% and has the auto-ability Jump. It can be bought for 4,000 gil at Ruffian's Lady Luck Forge in the Dead Dunes after completing Main Quest 4-3.

The Wyvern Spear is a

Dragoons. It can be obtained from

The Stone Vigil, either as a treasure, a drop from the bosses Chudo-Yudo or Isgebind, or a reward for completion of the duty.

Dragon Lance is a mid-ranked weapon for the Lilty, which provides 30 Attack and access to the Pulse Thrust Focus attack.

The Wyvern Lance is the second-most powerful spear. It has 110 power, 20 hit rate, is wind-elemental, and does additional damage to dragons.

A spear strong against dragons, but dropped by one. Echoes of chicken or the egg?

Wyvern Lance grants +10 to Attack and can be equipped by Dragoon, Kain, and Imp.

This section about equipment in Final Fantasy All the Bravest is empty or needs to be expanded. You can help the Final Fantasy Wiki by expanding it.

A spear that can only be wielded by those accepted by flying dragons. Wyverns are quite common among the dragon family, but they still view humans as lower lifeforms, and will rarely ever form a bond with them. There are rare cases of wyverns found living with humans, and when such a wyvern faces death, they turn into a spear as proof of their will to fight to the very end alongside the human they have acknowledged as their friend.

A polearm from the faraway world of Eos. It boasts an extremely sharp tip and is said to have been wielded by warriors known as dragoons. In that faraway world, it can be purchased in Altissia or found in damp, dark sewers infested with ferocious daemons.

Wyvern Spear is a spear that provides 80 ATK and +50% physical damage against Dragons. It can be found at Endless Cliff and as the reward for finding and turning in the Black Key found at Town of Sian.

Wyvern Lance (FFXV) is a spear that provides 86 ATK and increases Jump damage by 100%. It is obtained during the Final Fantasy XV event, Steyliff Grove. 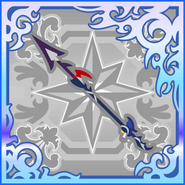 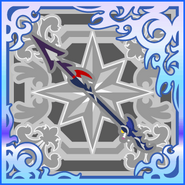