Edit
This article is about the adult enemy wyverns. For the Dragoon's pet wyverns, see Wyvern (Dragoon). 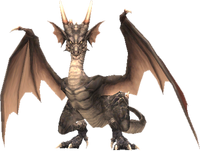 Wyvern are the most prevalent of the three dragon-like monsters in Vana'diel in Final Fantasy XI. Wyverns tend to be gold in color, and have very good sight; wyverns can see in front of them and from the side for a very long distance. The notable difference between a wyvern and a wyrm is the fact wyverns rarely fly. With a wide wingspan and two primary legs, wyvern are almost birdlike in appearance (compare to the rocs).

Defeated wyverns can leave behind skin, skulls and wings—each of which has their uses by expert crafters. Some of the more notorious wyvern have developed a taste for hoarding treasure akin to their larger wyrm cousins. Defeating these creatures can be almost as rewarding as defeating a wyrm itself.

It should be noted that these wild wyvern are distinctly different from the domesticated pet wyvern, which are smaller and significantly more docile than their wild counterparts.

One of the species is called Seiryu. [view · edit · purge]The Azure Dragon is one of the Four Symbols of the Chinese constellations. According to Wu Xing, the Taoist five-elemental system, it represents the wood-element, represents the east, and the spring season. Thus it is sometimes called the Azure Dragon of the East. It is known as Qing Long in Chinese, Seiryū in Japanese, Cheongnyong in Korean, and Thanh Long in Vietnamese.