The wyvern, also known as wind drakes (ひりゅう, Hiryuu?, lit. Flying Dragon), were the steeds of Deist's Dragoons who tamed them with the help of their pendants. To procreate, Wyverns drop eggs at the spring inside Deist Cavern where they incubate until birth, and wait for the call of the Dragoons.

When the Palamecian Empire attacks Castle Deist, the wyvern population takes a heavy blow, leaving only one alive by the time Firion reaches the castle. After Firion and his friends find the pendant of a past Dragoon, he explains the tragedy that occurred, leaving with them the last wyvern egg. Firion protects the egg from a Chimera and lays it in Deist's underground spring, where it would be incubated until the time of its hatching.

When Fynn comes under attack by the Emperor's Cyclone, Firion looks into the ensorceled mirror in Fynn Castle, which shows the amulet that reveals the young wyvern has hatched and taken flight for Fynn. Firion and his party ride on the back of the wyvern in a quest to destroy the Emperor within the Cyclone, and succeed. They fly back to Fynn, unaware the Emperor has been reborn by the dark powers of Pandaemonium. When the monarch reappears at Palamecia Castle, Ricard summons the wyvern to take the other party members out of the castle while he fights the Emperor. As the wyvern takes flight from the Emperor's doomed fortress, the Emperor slays Ricard, and the ancient line of wyvern riders dies with him.

The Wyvern key item the player acquires casts Blaze 7 when used in battle, making it the only key item in the series to have a function in battle and the first thing resembling a summon in the Final Fantasy series. 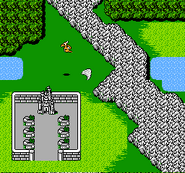 The Wyvern on the world map (NES).

The Wyvern on the world map (PSX).

The Wyvern on the world map (GBA).

The Wyvern in Deist Castle.

Artwork of the Wyvern by Yoshitaka Amano

Wyvern in flight in Pixel Remaster.