Edit
This article is about the Dragoon's pet wyverns. For the adult enemy wyverns, see Wyvern (Final Fantasy XI). 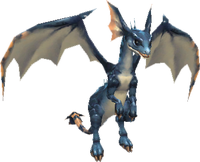 A Dragoon's Wyvern can be summoned once every twenty minutes. There are three types of Wyverns; Offensive, Defensive, and Multipurpose (mixture of the offensive and the defensive Wyvern). Each Wyvern uses its breath attacks differently, according to what type of Wyvern it is, and the type the Dragoon summons depends upon their support job. The wyvern will remain at the dragoon's side until it is either defeated or dismissed, or the Dragoon mounts a Chocobo. 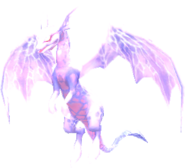 A player receives a Wyvern at the end of the same quest that gives the Dragoon class. The player is given a selection of names they can name their wyvern. If a player talks to Fouvia in Norg and trades her 9,800 gil, she will allow the player to change Wyvern names. The list she allows the player to choose from is over four times as long as the original list, providing additional names for selection. The players' support job choice affects the behavior of their Wyvern. There are three types of behavior—Offensive, Defensive, and Multipurpose.

If the player has any of the following support jobs, their Wyvern will be an Offensive Wyvern. This means it will use an Elemental Breath attack against the enemy. The Elemental Breath is triggered by the use of a weapon skill.

If the player has any of the following support jobs, their Wyvern will be a Defensive Wyvern. It will use Healing Breath after the player casts a spell while any party member (including themself) is lower than 1/3 HP (the Drachen Armet increases this threshold to 1/2 HP). The base/ceiling amount of HP restored is based on the Wyvern's max HP, the amount of total HP restored is based on the Wyvern's TP at the time Healing Breath is triggered. 300% Wyvern TP will restore the maximum amount of HP to either the player or a party member, while 0%-7% Wyvern TP will only restore the base amount HP, from Healing Breath. The base and ceiling amount that can be restored will rise as the player and their Wyvern levels up, usually around 3 HP each level. It will remove status effects upon the use of a weapon skill, and will either use a status Remove Breath or a Healing Breath when your HP is at 1/4 or below.

*Summoner gives the Wyvern defensive behavior, but is unable to trigger Healing Breath. This subjob combination can only perform Remove Breath.

If the player has any of the following support jobs, their Wyvern will be a Multipurpose Wyvern. The Wyvern will use both Elemental Breath attacks and Healing Breath effects. Unlike a Defensive Wyvern, the Multipurpose Wyvern cannot heal party members or remove status effects. The threshold for Healing Breath is also lower, with the Dragoon needing to be below 1/4 of their max HP (1/3 with the Drachen Armet equipped).

Just as the Dragoons of the five races have forged pacts with their wyverns, so have the Beastmen with their own. These domesticated wyvern, which assist Dragoon, are smaller and significantly more docile than their wild counterparts. Some domesticated wyvern will even continue to battle after their masters' death. There are also reports of wyvern-like beings in the lost realm of Lumoria that have been transformed by the otherworldly conditions of their environment.

Since enemies cannot have a subjob, all enemy wyverns are offensive wyverns and use only their elemental breath attacks.