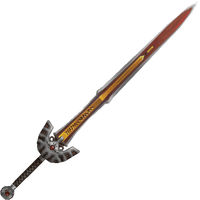 The Wyrmhero Blade (トロの剣, Toro no Tsurugi?, lit. Tolo's Sword) is a recurring weapon in the series. It is a red sword with silver edges and a golden fuller. Its guard resembles a gray bird with its wings spread out, with a red eye at the center. The grip is covered in brown leather. Its pommel is round and silver, with a ruby crest embedded.

The weapon is visually identical to Erdrick's sword, a recurring weapon in Square Enix's Dragon Quest series, with a different color scheme.

The Wyrmhero Blade is a powerful greatsword. Unlike most weapons, it has no license and is considered a key item rather than a piece of equipment, like the Sword of Kings and the Treaty-Blade, and therefore anyone can equip it.

It has an Attack power of 130, third only to Tournesol and Zodiac Spear, and has a high combo rate of 80%. The user is bestowed with constant Faith and Bravery (although the weapon description does not mention this), and +50 to Evasion, which is the highest of any weapon. It is, by far, the slowest weapon, having the longest charge time.

The Wyrmhero Blade can be bought from the bazaar for 65,535 gil after selling Omega Badge x1, Godslayer's Badge x1, and Lu Shang's Badge x1. It is also rarely stolen from Famfrit (Stage 50) and Gilgamesh (Stage 94) in the Trial Mode.

Wyrmhero Blade deals Holy-elemental damage, meaning its damage can be boosted further with the White Robes.

The Wyrmhero Blade is one of the strongest swords, boasting an Attack score of +67.

Wyrmhero Blade is a level 100 sword that provides +67 Attack. 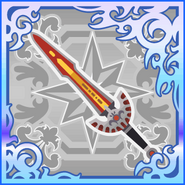 Ability card of Wol as Erdrick wielding Erdrick's Sword, which the Wyrmhero Blade is based on.

Tolo (トロ, Toro?) is an anagram of Loto (ロト, Roto?), the Japanese name of Dragon Quest character Erdrick. Erdrick is a mythological figure within the series, to the point his name is bestowed as a badge of honor to the bravest heroes.