Conjurer
Sister Wulfiue is a non-playable character from Final Fantasy XIV, she is a female conjurer living in Fullflower Comb area near the Hawthorne Hut, Gridania. She is a member of the Conjurer's Guild and appears in the guild's quests.

Wulfiue is a female Midlander Hyur with dark blonde hair, brown eyes, dressing in a black robe. She also wears a black pointy hat. Her weapon is a one-handed wand.

After receiving the title of Hearer, Wulfiue receives the Warrior of Light as his first apprentice. To teach him about the wind element, Wulfiue instructs him to exterminate a swarm of bees. After accomplishing the task, Wulfiue explains that the presence of the bees was the result of a disturbance in the natural wind currents and asks him to locate and purify the source of the disturbance with conjuration. Once done, Wulfiue shares her knowledge of the wind element to Warrior of Light.

Nolanel, Joacin and Wulfiue are sent to purify a powerful disturbance discovered in South Shroud. Sylphie becomes convinced that the conjuration itself is to blame for inciting nature's wrath. Fearing that the group of Heares are further angering the Twelveswood, Sylphie goes out to try to stop them. To Sylphie's surprise, they receive the help of the elementals to succeed in clearing the massive manifestation of corrupted earth.

Sister Wulfiue fights alongside the player as an ally npc during the Conjurer quests "Trial by Wind" and "Like Mother, Like Daughter". She knows basic abilities of the conjurer class. 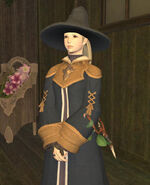 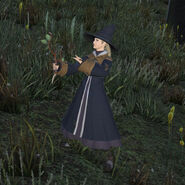 Wulfiue in battle.
Add a photo to this gallery
Final Fantasy XIV characters
Retrieved from "https://finalfantasy.fandom.com/wiki/Wulfiue?oldid=3397011"
Community content is available under CC-BY-SA unless otherwise noted.