Uses Zinger to possess one of the party, remaining hidden until that character is Wounded. Careful of long battles where he Wounds your party one-by-one.

Wrexsoul is a boss in Final Fantasy VI. A monster formed of the countless souls of those killed in the War of the Magi, it latched onto Cyan due to his despair over what happened to Doma, the world, and to Elayne and Owain. It is flanked by two Soul Savers and is able to possess party members in battle.

Wrexsoul starts off the battle with Fury, which makes it possess a character's body. This has no negative effects on the character, but Wrexsoul is considered removed from the battle and cannot be attacked. There is no way to tell which character Wrexsoul has possessed; it will only reappear if the possessed character is afflicted with Zombie, Petrify, or KO. The Soul Savers will periodically attack the party with magic and drain their MP when they run low, and they will endlessly respawn if killed.

When Wrexsoul reappears, the Soul Savers will cast Reflect on themselves and cast Cure on Wrexsoul, and Wrexsoul will cast Thundaga on them to attack. Wrexsoul is only out for three turns; on the third turn it will use Fury again and possess another character.

The easiest way to make Wrexsoul reappear is to cast Break on party members and then immediately cure them of the status with a Gold Needle or Esuna. Do this one by one until Wrexsoul returns. Its Thundaga is easily nullified by Thunder Shields, which will also resist the Firaga and Blizzaga spells the Soul Savers cast. When Wrexsoul appears ice-elemental attacks are most effective, particularly Blizzaga.

It is possible to easily defeat Wrexsoul due to a loophole in the AI script of the Soul Savers - if they are killed by something that stalls their final attack, they will not immediately revive when killed. The game will then detect that all enemies are no longer present and the battle will be won. The downside of winning this way is that because Wrexsoul was not present when the party won, the Guard Bracelet it normally drops will not be received. The summons Odin and Raiden, and the spell Banish both work for this, but Raiden has the highest chance of killing both Soul Savers at once.

At beginning of battle (only done once per battle): Fury

Wrexsoul appears as a Final Fantasy VI realm boss. His mechanics are slightly different to accommodate the limited resurrection abilities in the game. Now when a character is possessed by Fury, Wrexsoul will reappear when that character is attacked and not slain. If the a Soul Saver is defeated, instead of regenerating, they power up Wrexsoul. Wrexsoul has a lower priority of using Fury than he does in the original game. 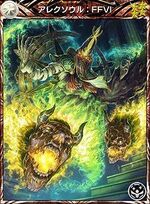 In the Super NES release of Final Fantasy VI, Elayne and Owain describe Wrexsoul as "made up of wretched spirits who were dispatched in meaningless wars." The original Japanese script and future English localizations instead state that the spirits forming Wrexsoul are those killed 1,000 years ago in the War of the Magi.

Wrexsoul's Japanese name "Alexsoul" implies a possible connection to the esper Alexander, the magicite found on Doma's throne when Wrexsoul is defeated.

Wrexsoul is similar to Gi Nattak from Final Fantasy VII. Both are said to be monsters formed from the composite souls of those killed in a war, and Gi Nattak is accompanied in battle by two Soul Fires, which possess the party members.

The name "Wrexsoul" was originally selected by 1994 Super Nintendo version translator Ted Woolsey. The name is simply a mistranslation of the Japanese, but could be interpreted as a play on "wrecks soul" or "wrecked soul", reflecting Wrexsoul's status as a composite spirit preying on Cyan's pain.