The Worm Hydra is a dragon enemy from Final Fantasy IX. The party can find it on Mount Gulug and the Salvage Archipelago on the Forgotten Continent, as well as various forests throughout Gaia on disc four. It can also be found in the forest on Uaho Island, outside of Chocobo's Paradise.

The party can catch Freeze and Venom from Worm Hydra's Cold Breath and Venom Breath attacks, respectively. If the player has not learned it yet, Quina can eat a Worm Hydra for the Bad Breath spell.

Before fighting a Worm Hydra, it is advised to equip the Antibody and Body Temp support abilities. It is also recommended to equip any equipment that reduces elemental damage or absorbs Lightning, Wind, or Fire to help with its remaining attacks. It can then be dealt with through the use of physical attacks or Ice-elemental attacks, such as Blizzaga. 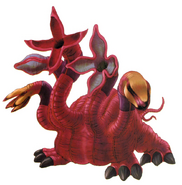 Flame.
Add a photo to this gallery
Retrieved from "https://finalfantasy.fandom.com/wiki/Worm_Hydra?oldid=3238396"
Community content is available under CC-BY-SA unless otherwise noted.