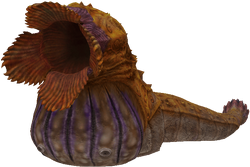 Worm is a fiend type in Final Fantasy X and Final Fantasy X-2. Worms are colossal and have a big mouth. They are know for their Swallow attack where they ingest a party member for a few turns, followed by Regurgitate, where they spit the character back out but delay their turn. If a swallowed character is not regurgitated before the Worm is defeated, that character will not gain AP.

Their most powerful attack is Earthquake that hits all party members, however, they need a few turns to prepare it. Worms are slow in comparison to the many other fiends but hit hard with their normal physical attacks. It takes 24 kills to Oversoul a Worm in Final Fantasy X-2, more than any other fiend type.