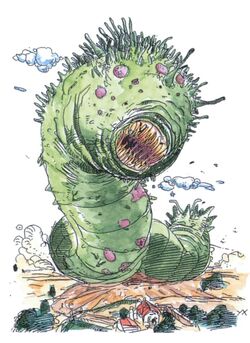 The Worm (ウォーム, Wōmu?) is a recurring species of enemy in the Final Fantasy series. They are usually shown as giant enemies with no features except a circular mouth. There are two common representations of the worms: sometimes they ascend from the ground and other times they are completely above ground depending on the game rather than the type. Most appearances of worms include many different variations.

One common type of worm is the Sand Worm (サンドウォーム, Sandowōmu?) which are most commonly a yellow or orange colored worm. Like most worms, they are commonly of the Earth element and are occasionally weak against the Water element. More often than not, the Worm monsters are characterized by their high HP, sometimes so large they appear alone. The creature is very likely to have been inspired by the sandworms from the novel Dune. Other variations include the Abyss Worm, Gigas Worm, and Land Worm.

The Purple Worm (Worm in the original NES release) is an enemy which can be fought in the Chaos Shrine. As its name suggests, it is purple in color. A weaker palette-swap, the Lava Worm, originally titled Grey Worm is a green recolor, contrary to its NES title. The Sand Worm is the weakest worm and is a rare enemy fought in many of the game's deserts. The Abyss Worm is an enemy from the Dawn of Souls and 20th Anniversary versions fought in the Earthgift Shrine.

A second series of worm sprites exists. The Gigas Worm is a pink and bulky worm fought early in the game near Pravoka. The green palette-swap, Crawler is fought later on in Marsh Cave. A third version, the Flood Gigas appears in the Dawn of Souls and 20th Anniversary editions in the Whisperwind Cove.

There are four worms, each using the same base template. The orange and brown Sand Worm is the weakest of the genus and is fought in the Great Desert and around Kashuan after obtaining Ultima. The second is the Abyss Worm, the pink and green recolor fought in the Jade Passage.

The third, and final in the NES and PlayStation editions is the Roundworm, the blue and brown edition fought in Leviathan and Pandaemonium. The Dawn of Souls version reveals the Unknown Cave, and with it the green and pink Gigas Worm, who also returns with the dungeon in the 20th Anniversary version.

There are two worms; the Blood Worm, a red version fought in the Nepto Temple, and the Sand Worm, a yellow version.

The first worm encountered is the Sand Worm, yellow in color, it is fought around Kaipo and in the Antlion's Den. The pale Flood Worm is a tough foe beneath Baron in the Ancient Waterway.

The Hornworm is also a member of a different species of worm. It shares its appearance with the Caterpillar and the Larva.

The Sand Worm is the only enemy that appears.

The Sand Worm is the first boss faced by Ceodore Harvey, and also reappears later as an enemy in Rydia's chapter. The Flood Worm appears in a number of locations including both the Ancient Waterway and Troia Waterway. The Abyss Worm appears in the late stages of the game including the Subterrane.

Two new species of Worm were introduced. A fourth variation of worm, the green Backed Worm appears on the moon's surface. A new rare enemy, the Gavel Worm uses a different base-sprite to the other worms, retaining the general style with four additional blades around its mouth. It is only encountered in the Lunarians' Tale, and is the strongest worm.

Only the Sandworm appears and is fought as a boss in the Desert of Shifting Sands. The boss battle has three Holes which the worm can ascend from.

There are four types of worms, one of which is exclusive to the Game Boy Advance port. The purple Slagworm is fought in the desert south of Maranda in the World of Ruin. They are very tough enemies, but give out lots of experience points when defeated.

The blue Zone Eater is fought on Triangle Island in the World of Ruin. It exists to recruit the secret character Gogo from inside the monster's stomach.

The gray Landworm is fought in Kefka's Tower. They use Hailstone to reduce a party member's HP, and Magnitude 8 to hit the entire party for Earth-elemental damage.

The red Abyss Worm is found exclusively in the Advance version as a boss in the Dragons' Den. It is only marginally stronger than the enemies in Dragons' Den. Despite this, it has plenty of spells and always uses counterattacks.

The two worms are both fought in areas with sand. The Land Worm is the weaker of the two and is fought in the Corel Desert. The blue recolor of the original orange land-based worm is the Sea Worm. Sea Worms are fought on the beaches of Mideel.

The Land Worm are the main type of worm, weak to Ice magic. The much tougher Shadow Worm isn't weak to any element but is immune to Gravity.

Worms are the only enemy present during the We Hope it's a Vacation mission, appearing nowhere else. Many other variations exist however.

The Land Worm is the only worm that sports an appearance close to the usual worm of the series. The obese, orange worm is fought in the Kiera Desert.

In addition to the Land Worm, two other worm enemies appear. The Carrion Worm is a small green insect fought in Cleyra. The Worm Hydra is a dragon-worm hybrid fought on Mount Gulug, the Salvage Archipelago and Uaho Island.

The Sand Worm can be fought in Bikanel and the Via Infinito. The Earth Worm is much darker in appearance and is also fought within the Via Infinito as well as the Farplane abyss.

Worms come in both small and large sizes, with the smaller being the more common. Sandworms are an extinct species in modern-day Vana'diel, though their activities were quite prevalent in the Crystal War, swallowing stray soldiers.

Although there are no Worm monsters per se, the Immortalis is a massive Worm-shaped mechanical monstrosity fueled by daemonic power. Its enormous size is consistent with depictions of many Worm enemies in the series, although the Immortalis is visibly much larger than any of them.

Sandworms and Landworms appear, both with fairly similar stats, although the Landworm is stronger.

The Carrion Worm is fought in the Mushroom Forest, and the Tiny Worm is a recolor.

A worm closer in appearance to previous incarnations, the Cave Worm, is a boss in the Selepation Cave, holding the Wind Crystal. It appears in battle with some Electric Jellyfish.

Main article: Worm (My Life as a King)

The Worm is an enemy and also a possible monster that the party's monster unit(s) can transform into. It can be found on the fifth floor of the Tower.

The Worm is an enemy and also a possible monster that the party's monster unit(s) can transform into.

The Worm, LandWorm, and GigaWorm are enemies and also possible monsters that the party can transform into.

Worm is an enemy family:

Land Worm appears as a summon. It can be bought on the Moogle shop at Melmond in Chapter 4 of Main Scenario: 012, and at the Provoka Moogle shop in Confessions of the Creator.

It appears as a colored version of its original Final Fantasy II artwork.

Abyss Worm from Final Fantasy VI appears as an enemy.

Sand Worm appears in the desert near Ancheim.

Sand Worm is a chance card, the card's ability: Forced to sell one of your target house with extra 200G.