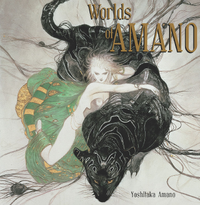 Worlds of Amano is an artbook featuring works by Yoshitaka Amano. It was originally published in France on March 24, 2004 by French comic publisher Soleil Productions as Les mondes d'Amano. It was translated into English and published by Dark Horse Comics under its English title on April 10, 2007. 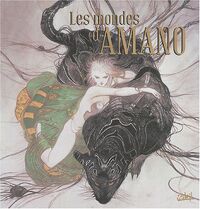 The artbook features various works of Amano's from 1983 up until 2001.

Introduction, p.006
An introduction to Yoshitaka Amano written by Jean Wacquet.
Mœbius/Amano
The door of the worlds, p.007
Illustration of Amano illustrating by Mœbius (pseudonym of Jean Giraud)
Beginnings, p.009
Assortment of works from 1983 to 1999
The eroticism of The Tale of Genji, p.033
Several illustrations from a work based on The Tale of Genji by Murasaki Shikibu, published in two volumes by Kodansha written by Jakucho Setouchi with illustrations by Yoshitaka Amano on December 14, 1992 (first)[1] and January 20, 1993 (second)[2]. The illustrations alone were published by Anzudo in August, 1997[3], and later in English by Dark Horse on July 26, 2006[4].
The 1001 nights, p.043
1001 Nights was a short animation concert video based on Amano's Budouhime illustrations, directed by Mike Smith, played live with music composed by Dean Newman.[1] The Budouhime artbook featured illustrations based on the One Thousand and One Nights Middle Eastern folk tales and was published by Kodansha in December 1996.[5]
Chimera, p.051
Features three illustration Amano did for Baku Yumemakura's horror novel series, Chimera in 1987.
Rampo Edogawa, p.055
Rampo Edogawa was a Japanese mystery author. Kodansha republished his novels in 65 volumes in 1998 featuring cover illustrations by Yoshitaka Amano. Featured in this section are his covers for Bad Boys (悪人志願, Akunin Shigan?), I'm the Man of Twenty Faces (おれは二十面相だ, Ore wa Nijūmensōda?), The Golden Panther (黄金豹, Ōgonhyō?), and The Sorcerer (魔術師, Majutsushi?).
Shishi-O, p.061
Shi Shi Oh (獅子王, Shishi-ō?) Magazine commissioned covers.
Elric and the works of Michael Moorcock, p.073
Cover illustartions for Michael Moorcock novels.
Celtic Fantasy and Fairies, p.081
Between 1994 and 1996. All but one piece (Lancelot) come from Yōsei (妖精?) released by Anzudo in December 1996[6], published in English as Fairies by Dark Horse on June 21, 2006[7].
The chronicles of Arslan, p.089
Amano illustrated the Arslan Senki novels written by Yoshiki Tanaka.
Guin Saga, p.095
Amano illustrated for the Guin Saga novel series written by Kaoru Kurimoto from 1984 to 1997. The section also features a lithograph from 2000.
Vampire Hunter D, p.105
Amano has been illustrating the Vampire Hunter D novels written by Hideyuki Kikuchi since the inception in 1983.
Final Fantasy, p.129
The section features illustrations from Final Fantasy I through VII, and one each from Final Fantasy VIII and Final Fantasy X.
Biography and exhibitions, p.155
Short timeline of Amano's professional career up until 2003.

This section has been dapted from the English version of the book.

Retrieved from "https://finalfantasy.fandom.com/wiki/Worlds_of_Amano?oldid=3185973"
Community content is available under CC-BY-SA unless otherwise noted.