Edit
watch 02:44
World Of Final Fantasy Trailer
Do you like this video?
Play Sound

Set in the land of Grymoire, World of Final Fantasy chronicles the adventures of Lann and Reynn, twin siblings who must tame monsters and befriend characters from other Final Fantasy games to reclaim their lost memories.

A multiplayer spin-off, called World of Final Fantasy: Meli-Melo, was announced in November 2017. Due to low interest, Meli-Melo was shuttered in December 2018.

An enhanced edition, called World of Final Fantasy Maxima, released on November 6, 2018, for PlayStation 4, Xbox One, Nintendo Switch and PC. Maxima adds new characters and story arcs, and includes the ability to transform into a classic Final Fantasy character.[2]. It is also available as an upgrade pack for owners of the original PS4 game. PS Vita users cannot upgrade due to technical restrictions.

Players determine the actions of Lann, Reynn, and a series of tamable monsters called "Mirages." They explore a variety of locations and use the Mirages in their arsenal to navigate the environment, clear obstacles, or reach hidden treasure. Players can choose to play as Lilikins (small, "chibi" versions of Lann and Reynn) or Jiants (their regular versions), and they can switch between these forms at any time, so long as they are outside battle.

Battles are turn-based. Lann and Reynn team up with their Mirages to form "stacks," which determine the party's stats and usable abilities. They can be toppled by the enemy, resulting in a brief stun period, or manually separated by the player without penalty. Foes sometimes create stacks when encountered, as well.

Enemy Mirages can be brought to the players' party with the Imprisming system, by possessing a respective Prism then using certain types of attacks on the Mirage to put it in a "Prismtunity" state, in which they can then be imprismed. When successful, the Mirage is recruited to the player's party.

As playable Mirages level up, players may unlock abilities and stat boosts for them through the Mirage Board system. Each playable Mirage has its own Mirage Board, and unlocking spaces in which they learn these abilities require certain amounts of SP, gained as Mirages level up. These abilities are then made available for players when present in their active stacks. Lann and Reynn can also learn abilities by equipping special items called Mirajewels.

While Lann and Reynn's primary goal is to collect as many Mirages as possible, they can also accept sidequests to collect additional rewards. As they progress on their journey, the twins are joined by Mega Mirages and Champions, powerful allies that can be called upon to assist them when the necessary conditions have been met.

There are two playable characters who are controlled during battle and can be freely switched between on the field.

Lann and Reynn encounter many unique individuals on their journey through Grymoire. They are characters from the Final Fantasy series, save for one.

Reynn and Lann awaken in the world of Nine Wood Hills to find all the shops and streets around them empty. There is only a single person, Enna Kros, and fox named Tama who has been squatting on Lann's head. The two explain that Lann and Reynn have lost all memories of their past as Mirage Keepers and must set out on a journey to collect Mirages, perhaps even meeting their lost family in the process.

Reynn and Lann travel to Grymoire, arriving at Wellspring Woods, where they have gained the ability to take on the miniature form known as "Lilikin." The two confront their first murkrift containing a powerful Mirage, but are woefully unprepared and sent back to Nine Wood Hills, thanks to Tama sacrificing one of her many lives. The two meet the merchant Chocolatte and go shopping, then meet another Mirage named Serafie, who agrees to aid them on their journey. They again run into Enna Kros, who bids them farewell, but not before telling them that she is "god" and that they must now begin their journey. The two again return to Grymoire, ready to begin their journey proper.

Reynn and Lann arrive at Bridge Overlook and ride a train run by a Cactuar Conductor and arrive in the town of Cornelia. There, they find a host of Mirages in the employ of the Bahamutian Army attacking the city. They make quick work of them, but Lann shocks the townsfolk by assuming his Jiant form. Nevertheless, the town's leader, Princess Sarah, detects the truth of their otherworldly nature and warmly invites them to her castle. She tells them that they are the "Jiants from the Hills" of prophecy, who will bring either salvation or ruin to Grymoire. The two leave, agreeing to return to help Cornelia, but first they must visit The Nether Nebula to capture more Mirages.

Lann and Reynn leave Cornelia to capture more Mirages, and eventually make their way to the Nether Nebula. Within the Nether Nebula, Reynn and Lann encounter the powerful Mirages Ifrit, Shiva and Ramuh, whom they have unknowingly met before, and agree to a test of strength. While they pass, they do not have the strength to command such powerful Mirages and are left with a prismarium of a lesser Mirage from their tribe. They return to Cornelia to face the Bahamutian Army.

Realizing few children play Final Fantasy, executive producer Shinji Hashimoto approached Hiroki Chiba to develop World of Final Fantasy. Art designer Yasuhisa Izumisawa created stylized characters for use in the project.[3] As revealed World of Final Fantasy is experienced through its protagonists' eyes, thus scenes were added to the game that would grab players' attention and invest them in it emotionally.[3]

The re-release, World of Final Fantasy Maxima, was developed under the low budget, so what could be achieved was limited. The difference in resolution between handheld and TV modes on Switch caused some trouble for the staff. The game engine is the Orochi Engine, which the Switch didn't support, but Square Enix got the engine team to support the Switch. The PS Vita version lacked sufficient memory and thus was not able to support the upgrade.[4]

Some people wondered if Lann's puns were really necessary, so the team considered an option to turn them off in Maxima, and the alteration was practically finished, but then the team "felt bad for him" and thought better of it. For the second playthrough, Chiba considered audio commentary from the characters that appear in each cutscene, but it was abandoned for being too "meta".[4]

While there are no plans for a sequel, Hiroki Chiba has fully written the story and could start development if Square Enix gives approval.[4]

Prior to the release of the main game, the "Dungeon Trial Edition" of World of Final Fantasy was released for PS4 and PS Vita on October 17, 2016. After completing the trial edition, the Magitek Armor P became a companion when starting the main game.

World of Final Fantasy was released in North America, Japan, and Europe on October 25, 27, and 28, 2016, respectively. Standard, Day 1, Limited, and Collector's Editions were available. Day 1 Editions came with the option to use Japanese voice acting, a Sephiroth Champion medal, and access to three Mirages: Red Bonnetberry, White Chocobo, and Glow Moogle. Pre-ordered Day 1 Editions also contained a Cactuar Johnny Mirage, Crimson Armor, and a PlayStation 4 theme. Limited Editions include the aforementioned content, as well as a 24-page art book. Collector's Editions could only be obtained from the Square Enix Online Store, and they contain all exclusive material from the game's other versions and are packaged with an 80-page art book, a copy of the World of Final Fantasy Original Soundtrack, and a set of three mini figures: Cloud, Squall, and Lightning.

A PC version was announced on October 31, 2017, and released on November 21 via Steam. The Day 1 Edition, which included a digital soundtrack sample and a desktop wallpaper, was available until November 28.

On November 6, 2018, a DLC expansion called "Maxima Upgrade" was released and is available for most platforms that World of Final Fantasy is on, excluding PlayStation Vita due to the console's limitations. A physical edition was released for the Xbox One in North America while the Nintendo Switch received a physical edition in Southeast Asia, as well as Hong Kong and Korea. The following were added with the expansion:

With the exception of Sora's Champion Medal, World of Final Fantasy Maxima for the Xbox One and Nintendo Switch contain all the DLC Champions and Mirage Coliseum Tickets. 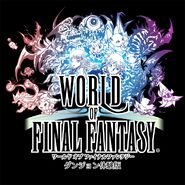 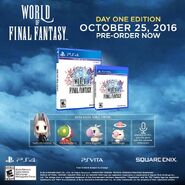 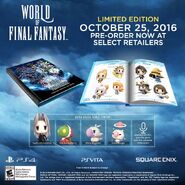 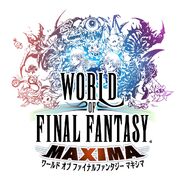