The World Regenesis Organization was founded and controlled by Reeve Tuesti.

The WRO is comprised mainly of military units and scientists, such as Shalua Rui. Other members include Cait Sith, an animatronic cat designed and controlled by Reeve; Yuffie Kisaragi, a former thief and proponent of Wutai restoration who heads espionage and intelligence gathering; Cid Highwind, leader of the WRO air force; and Barret Wallace, who leads the search for a new energy source for the world.

The design for the WRO troops' weapons seems heavily based on modern day service pistols and assault rifles, contrary to the weapons used by Deepground. For example, the carbine used by WRO infantrymen seems based on the Sig model 552 Assault Rifle, while the Deepground rifles appear to be modified Lee Enfield rifles dating back to World War II. The pistols used by the WRO also seem to be hybrids of the tradition M1911A1 pistol and the TT33 Tokarev. The clearest examples of these are used by Shalua Rui and Reeve Tuesti.

Their uniforms are also of some slight resemblances to UN troops, only they wear red berets rather than blue. They could also be based upon the British paratroopers who were known for their red berets.

The WRO was founded by former Shinra Employee Reeve Tuesti sometime soon after Final Fantasy VII. It can be assumed that the origins started with those who worked to evacuate Midgar alongside Vincent Valentine and Yuffie Kisaragi. Though not related, they appear to have taken up the fight where AVALANCHE left off.

It is funded by a mysterious benefactor. It is heavily implied to be former president Rufus Shinra as penitence for his actions against the planet.

As its name suggests, the WRO was created to restore the world after the damage caused by Shinra. They form a transitional government to keep stability, along with a volunteer army to help protect against any threats to the Planet. They work to find a replacement for Mako as an energy source, a division apparently headed by Barret Wallace. They were also the ones who relocated the former residents of Midgar to the new city of Edge, and helped to construct it from materials of Midgar and the Shinra Building.

The WRO made its true debut in the Deepground War, and see their first armed engagement in a surprise attack on Kalm by Deepground. The WRO's army sprang into action to protect people from harm, and tried to discover as much as they could about the origins of Deepground.

Yuffie Kisaragi was the main head of intelligence gathering, and as the Tsviets were targeting Vincent Valentine, he was unofficially included in the fighting.

The fighting eventually escalated to the Battle of Midgar, in which the WRO, headed by Cid Highwind and the airship Shera from the air, and Cloud Strife, Tifa Lockhart, and Barret Wallace from the ground.

While not featured in the movie, a World Regenesis Organization poster with the organization's logo can be seen on a wall in the streets of Edge.

A roadblock that is knocked aside by Kadaj has the organization's name on it, implying that they are building the Planet's infrastructure.

A member of WRO appears as a character card. 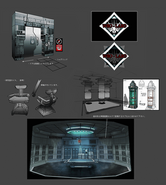