Ancient machina restored by the Al Bhed. Not a war machine, but hits hard with its tool arm. Vulnerable to lightning, so Thunder is the way to go.

Worker is an enemy in Final Fantasy X. It is an ancient machina salvaged by the Al Bhed. The party encounters several while rescuing Yuna when she is kidnapped by the Al Bhed Psyches in Luca.

As with other machina, Workers are weak to Lightning. Unlike later machina enemies, however, Steal will not instantly defeat Workers, in the event the player is using the Expert Sphere Grid in the International Version or HD Remaster versions.

Lulu should cast Thunder to quickly dispatch them. 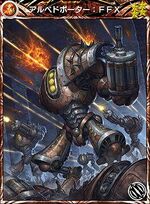 Retrieved from "https://finalfantasy.fandom.com/wiki/Worker_(Final_Fantasy_X)?oldid=3380989"
Community content is available under CC-BY-SA unless otherwise noted.