Wol is a "Blank," one of the young men who wash ashore the strange land of Palamecia without any memory of their past.
Through his travels, he learns a great deal about himself as much as the secrets behind the laws and the great prophecy that rule over Palamecia.

Wol is the main protagonist of Mobius Final Fantasy. He arrives on Palamecia with no recollection of his past, bearing a name of the prophesied "Warrior of Light".

Wol is a tall, muscular man with short, white hair, and hazel eyes. His appearance changes depending on the job class he is currently assigned with. He normally wears armor on his sides with pauldrons on his shoulders and armored sleeves, with a black tight material with gold ornaments concealing his front, leaving his back bare and a variety of tattoos visible. Wol wears also what appears to be leggings, which are covered with armor.

Wol is sarcastic and has doubts about the prophecy. Despite his reservations and unwillingness towards it, he continues on his journey, mainly out of curiosity. Whenever Princess Sarah makes advances toward him, Wol pushes them away. Despite his cold and seemingly uncaring exterior, he can also be sad and angry as seen when he loses his dear friend Mog.

Wol arrives in an unknown world with no memories. A mysterious voice helps guide him through his journey and tells him that "This country is the land of Palamecia, a place bereft of any hope. Its people wander in melancholy, their hearts untouched by the Light of Hope."

In a post-credits scene, Wol is being transported to another world, and subsequently encased in crystal alongside Sarah and Meia.

Wol uses the abilities and weapons of a Warrior, Mage, Ranger and Monk, depending on the equipped job card. Each job features branching evolutions upon completing their respective skill panels and can provide Wol with new appearances and weapons.

Wol in the Prince of Lorasia's attire. 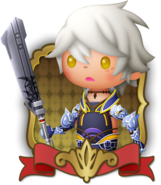 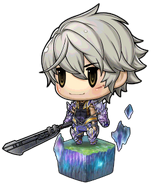 Wol is a playable character who could be initially recruited during the Collector's Event Doorway to Another Realm as a First Time Reward for completing the event's Runic Temple - Easy stage.

Wol appears on Triple Triad cards in the version available via the Final Fantasy Portal App. 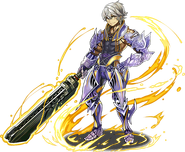 Wol was designed with a lightweight costume for his initial "Onion Knight" gear, seeing that it was intended as a "bare bones" job. In response to player feedback, the design was changed to cover up more.[1]

He is voiced by Bryce Papenbrook in the English release. 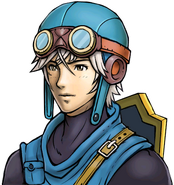 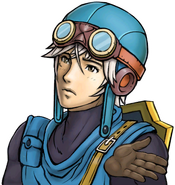 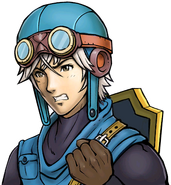 The "Voice" speaks to Wol. 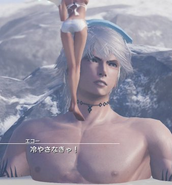 Wol in a hot spring.

Wol and Sarah go on a new journey.

[view · edit · purge]"Wol", or more precisely "WoL", is an acronym derived from the first letter of each word of the term "Warrior of Light".