The Wladislaus is an enemy in Final Fantasy XIII. A type of Undying, this Cie'th can be encountered in Orphan's Cradle, first as a mini-boss and later as a regular enemy.

Wladislaus is weak against elements, but has a high Stagger point. Wladislaus is susceptible to Daze, although the chance to inflict is low.

The battle is made easier if the party can use an Aegisol and a Fortisol (can be purchased from the Eden Pharmaceuticals for 12,000 gil each) to begin the battle with all necessary buffs. Good paradigms to use are the Thaumaturgy (RAV/RAV/MED) and Combat Clinic (MED/SEN/MED). Alternatively, a party could start with Protection (MED/SEN/SYN), have the Synergist cast the necessary buffs, then switch to Delta Attack (COM/SEN/RAV).

Another strategy for a party consisting of Lightning, Hope, and Fang includes the paradigms Prudent Planning (SYN/SYN/SEN), Mystic Tower (RAV/RAV/SEN), and Cerberus (COM/COM/COM). The player should let Fang absorb Wladislaus's attacks while Lightning and Hope buff the team. After that the player can switch to Mystic Tower (RAV/RAV/SEN) and drive up Wladislaus's chain gauge, then switch to Cerberus (COM/COM/COM) and take it down with force. The player can also consider debuffing it, though Wladislaus's Mounting Contempt may cleanse them. This tactic requires Lightning's Synergist skill tree to be unlocked.

Ravagers are effective, although a Synergist can also buff a Commando with an En-spell.

Wladislaus has such a high stagger point it's no use trying to stagger it, but the higher chain the party can build, the more damage they deal. Wladislaus can still be staggered with Random: Instant Chain synthesized ability; this is easiest when using either Sazh or Lightning as party leader and using their full ATB skills; Sazh's has 17 chances to trigger Random: Instant Chain, and Lightning's has 11.

When fought as a regular enemy, Wladislaus is easily defeated through the use of Deceptisol as it will begin the battle with 999.9% chain. 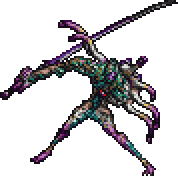 [view · edit · purge]"Wladislaus" was the name of several Polish monarchs and is a variation of the Slavic name Vladislav.

Retrieved from "https://finalfantasy.fandom.com/wiki/Wladislaus_(Final_Fantasy_XIII)?oldid=3293281"
Community content is available under CC-BY-SA unless otherwise noted.