Rod that sets even the farthest target ablaze.

The Wizard Rod (ウィザードロッド, Wizādo Roddo?), also known as Wizard Staff, Magus Rod, or Wizard's Staff, is a recurring weapon in the Final Fantasy series, that can either be one of the weaker or stronger weapons. It is mainly used by mages, and oftentimes increases Magic Power tremendously, though this is not always the case.

The Wizard Rod is the second weakest rod that grants 20 Attack power and +5 Intellect. it can be bought at Northeast Saronia for 20,000 gil in the 3D version. It can be used by Onion Knights, Black Mages, Evokers, Red Mages, Magi, Summoners, and Sages.

The Wizard Rod is a high-ranked rod that provides 21 Attack, 5% Accuracy, and +9 Intelligence. It is Fire, Ice, and Lightning-elemental and is found in Palom's Challenge Dungeon. When used as an item, it casts Dancing Dagger.

Staff that increases the power of elemental spells. Full power from back row.

The Magus Rod is a sealed weapon, and the counterpart to the Sage's Staff. It is fire, ice and lightning-elemental, powers up all elements except Water and Holy by 50%, and has an Attack Power of 40.

Rod that boosts its wielder's magic.

The Magus Rod has an attack power of 168, provides +7 Magic, +30% Magic Evasion, and enables the Runic command. It can be dropped from Earth Dragon, or by betting a Healing Rod at Dragon's Neck Colosseum and defeating a Tonberry.

The Wizard Staff is a weapon for Aeris, though it does not have any special properties aside from Double Materia growth. It is obtained by grabbing the treasures on the Mt. Corel mountain path, in the sections the railway bridge collapses. There are three such sections and two treasures to nab. The staff can also be bought in Junon for 1,800 gil (discs 2/3), but Aeris will not get to use it then.

Wizard Rod is the second-strongest rod, trumped only by the Whale Whisker and has an Attack power of 31. Only Dagger can equip it. It teaches the abilities Curaga, Protect, and Shell, and it can be stolen from Kraken and bought from Black Mage Village (endgame) for 3990 gil.

The Wizard's Rod is a weapon for Kytes crafted through the Forged by Fire recipe book. It provides a base of +45 Attack, +90 Magick, and +36 Speed, and is Fire-elemental. It uses a generic rod sprite during battle.

A rod that enhances the magickal potency of its wielder.

The Wizard Rod can be bought for 8,000 gil, or poached from Dark Behemoth. It has an Attack power of 4, Weapon Defense of 20%, and increases Magic by 2. It can be found with the Treasure Hunter ability in Dugeura Pass. The Mage's Staff is called Wizard Staff in the PS version.

Wizard Rod provides 35 Attack Power and Intelligence +9. It is found in a chest at the end of Akame Valley.

While not appearing formally, the Wizard Rod is wielded by Garnet in her alternate Phantom Stone.

Krile wields the Final Fantasy V version of the Magus Rod in her character model.

This rod grants command over many magics. Those with it are oft dubbed cheaters.

Magus Rod grants +6 to Attack. It can be equipped by Black Mage, Magus, Time Mage, Summoner, Aerith, and Shantotto.

The ウィザードロッド (VII) is a rarity 5 rod. It teaches Aerith Pulse of Life.

A rod of fearsome magical power that is believed to be a remnant of ancient times. The term "wizard" was a special title given only to the best of mages, but it has since lost this original meaning after black mages began using the term to refer to themselves and their secret activities. The wizard rod, however, has not lost any of the power it has housed since times of old.

A magician's rod from the distant world of Gaia. It is said to have been wielded by an Alexandrian princess who, distressed over her mother's invasion of neighboring lands, chose to flee from her homeland. The princess assumed an alias as she traveled and learned more aobut the world, and eventually grew into a woman fit to be queen.

Wizard Rod is a Rod obtained by completing the Surging Menace trial. It provides 18 ATK and 72 MAG.

The Wizard Staff appears as a 2-handed rod within the Forsaken Dungeon. It provides 62 Weapon Atk, 9 Durability, +10 Magic Atk, +3 Magic Def, -1 Speed, and -1 Consumption Rate. Only Clair Andrews can equip this weapon.

Wizard Rod is a staff that can be equipped by Yui.

A rod that raises magic attack more effectively than conventional rods. Invented and developed in Eternia and then successfully mass produced using the advanced technology in Ancheim. 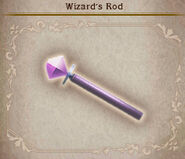 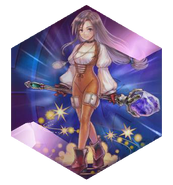 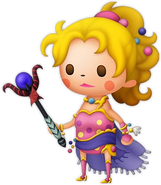 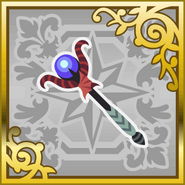 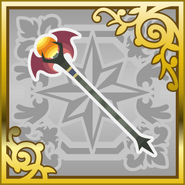 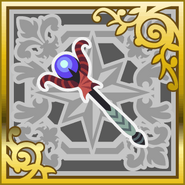 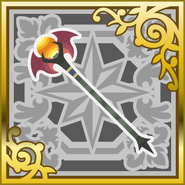 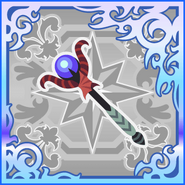 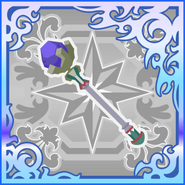 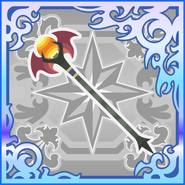 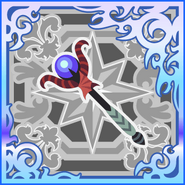 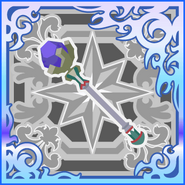 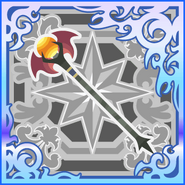 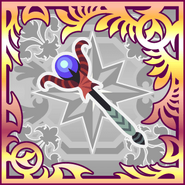