Wingvern is a flying enemy in Final Fantasy Type-0, encountered in the fifth and eighth mission.

These creatures form the core of the royal army, a fixture in every one of the kingdom's dragon platoons. By remaining constantly aloft, the wingvern is able to rain terror down upon its opponents while keeping out of range. Combatants unable to attack from a distance must await an opening, then strike to bring the beast to the ground. Nearly all wingverns in existence belong to the Concordian Army, but scientists have recently confirmed a related species in the wild known as the "lesser lopros." 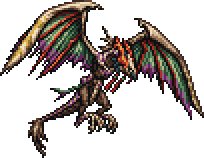 Wingvern is a portmanteau of "wing" and "wyvern." [view · edit · purge]A wyvern is a medieval European mythological winged creature with a dragon's head, reptilian body, two legs (sometimes none), and a barbed tail. They appear in many crests of Europe's ancient families, symbolizing strength. The word wyvern comes from wivere, which means serpent.