Boomerang that may dispatch an enemy in one hit.

Wing Edge (ウィングエッジ, Wingu Ejji?), also known as Wingedge, is a recurring throwing weapon in the series. Its rank varies between games, but it is generally a strong throwing weapon, as it ignores damage reduction from the user being in the back row.

While not appearing physically or having any statistics inside the data, there is a text string of Wing Edge suggesting that at one point during development that this weapon was planned to appear in the 3D remake as a boomerang.

Wing Edge is a mid-ranked boomerang that provides +32 Attack and has an Accuracy of 30%. It can only be obtained on the last floor of Edge's Challenge Dungeon.

Wing Edge is the most powerful boomerang, only found in the Phoenix Cave or Ancient Castle. It has an attack power of 198, +7 Strength and Speed, +2 Magic, and +1 Stamina with the additional effect of a 25% chance of inflicting Death when attacking with it. It can only be equipped by Locke.

Throwing weapon more powerful than the Rising Sun. It is used with the command 'Throw' and cannot be equipped.

Wing Edge is the strongest throwing weapon that Amarant can throw; it cannot be equipped. It is not available for purchase in any shops besides Mene's shop in Chocobo Hot and Cold. It has an Attack Power of 64.

Wing Edge is the strongest thrown weapon and is Wind-elemental.

Wing Edge is a level 90 thrown weapon that provides +65 Attack, -1 Defense, -35 Bravery, and +7% EX Force Absorption. It can be obtained by trading Thief's Hope x5, a Syldra spine, and a Chakram. 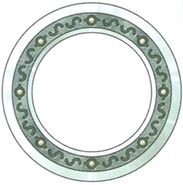 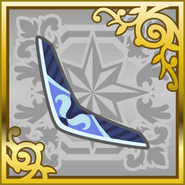 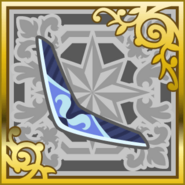