A wing is an appendage with a surface that produces lift for flight and/or propulsion through the atmosphere, or through another gaseous or liquid fluid. It is an airfoil, which has a streamlined cross-sectional shape producing a useful lift to drag ratio. In many Final Fantasy titles, characters and creatures appear with real or symbolic wings.

White-feathered wings as angels are commonly depicted with are signs of good characters, while black leathery wings are signs of evil and black-feathered wings symbolize the corruption of goodness. Wings are also symbolism of the divine, representing one as a god-like being or as connected to a god.

The Emperor bears six white wings when encountered in Arubboth as the Light Emperor, ruler of Heaven.

Kefka Palazzo bears four white-lavender angel wings and two black demonic wings below them after he absorbs the power of the Warring Triad and becoming a god. In the FMVs of the Anthology release, he is instead shown with six golden angel wings.

Demon has two white angelic wings, Fiend has two yellow demonic wings, and Goddess has a golden wing extending from the sun disc behind her head.

The esper Seraph has one set of wings, and its ability is Angel Feathers.

Sephiroth bears seven wings in his Safer∙Sephiroth‎ form. His legs are gone, replaced with six angel wings from below the waist, and his right arm is transformed into a black, red and purple wing. The final boss theme against Safer∙Sephiroth is named "One-Winged Angel" for his appearance.

In his appearances in Final Fantasy VII: Advent Children and the Dissidia Final Fantasy series, Sephiroth bears a feathered black wing extending from his right shoulder as an allusion back to Safer∙Sephiroth and symbolizing his status as a fallen hero.

When fighting Avalanche, Sephiroth manifests his black wing over his right shoulder. The Jenova body also has a stump of a wing when being carried from the Shinra Building.

The growth of wings is linked to the Jenova Project. Genesis Rhapsodos bears a large black wing similar to Sephiroth's over his left shoulder, while Angeal Hewley bears two white wings from his left shoulder.

The copies the two produce bear similar wings, and Genesis and Angeal retain the wings, though in different forms, when they become Genesis Avatar and Angeal Penance. Various characters interpret the symbolism of wings differently, in tying into the game's thematic elements. Cissnei considers wings a sign of freedom, which Zack Fair would symbolize with that of an angel, while Angeal and Genesis consider them the traits of a monster.

Genesis can command the feather of the wings to attack and his Black Flurry attack involves him cursing the feathers and sending them at Zack. 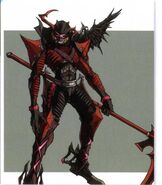 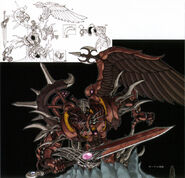 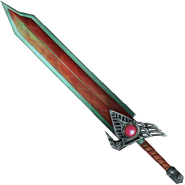 Several sorceresses are associated with wings. Rinoa Heartilly has two angel wings on the back of her clothing, her ultimate weapon, the Shooting Star, is made of angel wings, and she grows literal wings during her Angel Wing Limit Break. Griever, the ultimate Guardian Force that Ultimecia draws from Squall Leonhart's image of the beast, has two feathered white wings with black linings. The Griever engraving on Squall's Revolver has angel wings.

When Squall and Rinoa return to the flower field at the end, the flower petals swirling in the air transform into white feathers. 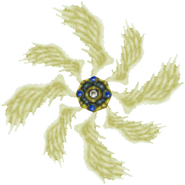 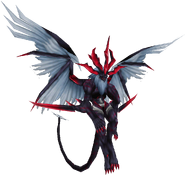 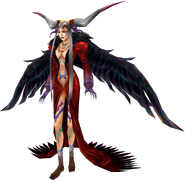 Eiko Carol bears two small wing ornaments on her back that enlarge into full wings when she enters Trance. The ultimate eidolon Alexander has white feathered wings, the first and to date only time he bears them. The Black Waltz, elite Black Mages, have black and blue feathered wings.

The Tantalus logo seems to symbolize Zidane—it is blue and bears a heart, a dagger, and a pair of angel wings.

Both Zidane and Kuja were made to be Garland's "angels of death" to cause chaos on Gaia. 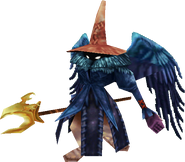 Yuna wears a wedding dress that has white wings incorporated into its design when preparing to wed Seymour Guado.

After its first form is defeated, Braska's Final Aeon grows large spikes from his back in a manner resembling wings.

Selh'teus gains multicolored wings upon merging with the soul of Phoenix near the conclusion of the Chains of Promathia storyline.

One of the game's expansion is titled Wings of the Goddess and at a couple points, makes reference to Lilisette and the player character as being Altana's wings with an abstract wing behind each. Lady Lilith has two bat-like wings with a claw at their bends and when she absorbs Lilisette's power, she takes on an angelic form with two white bird wings.

The Black Mage job-specific emote temporarily manifests two black bird wings on the player's back. The Dragoon job emote manifests two abstract wings made of shining light. The scythe weapon skill Quietus ends with two bat wings on either side of the target.

Orphan has several large golden wings in his first form, on the right side of his shell that is crafted in the image of Lindzei.

When Lightning changes her schema mid-battle, she does so in a burst of white feathers. Dragoon-type garbs also have varying in design wings on both shoulders.

Bhunivelze has six wings on his back. Etro is depicted as a winged Valkyrie in the murals of the Temple Ruins.

Lumina has both a metal feather adornment as part of her necklace, and feather trimming on several parts of her clothing.

Etro depicted as a Valkyrie. 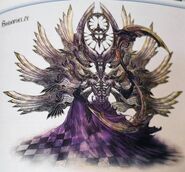 The kings of Lucis are associated with wing motifs as per their royal arms, which each have them, and often have wing only on one side. The emblem for the kingdom of Lucis is a skull with a wing. The emblem for the Kingsglaive is a winged Bahamut, while his true form has wings made of swords and flowing lengths of fabric. Bahamut is portrayed on the cover of some editions of Cosmogony as a armored human with two black wings.

Instances of humans depicted with one angel wing refer to their status as mortals who wield divine powers as a gift from the gods, as beings sent by the gods themselves are depicted with two wings in Cosmogony. The Oracle in the prophecy painting is an angelic figure who has one wing. She also appears on the game's logo as a one-winged sleeping woman. Ardyn Izunia at times wears a black wing accessory, likening him to an image of a fallen angel. When Ardyn wields Armiger in Final Fantasy XV: Episode Ignis, the red silhouettes of the royal arms fold out behind him to give an appearance of wings.

Curiously, the symbol for the Dark element is that of a wing.

Winged-skull, the symbol of Lucis.

A Royal Arm with angel wing's on one side.

Artwork of Ardyn Izunia and his black wing accessory.

Bahamut is an armored man with wings made out of swords.

The Lucavi Ultima is a two winged angel when Ramza and his companions face her in the Airship Graveyard.

Kefka, Sephiroth and Ultimecia bear wings as described above, though in her EX Mode Ultimecia retains Griever's white wings, as it is her junctioning Griever and not the other way around. In his "Emperor of Arubboth" outfit, the Emperor of Final Fantasy II bears the wings depicted in the Light Emperor's sprite. 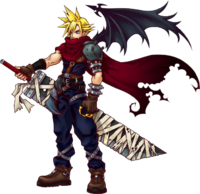 Sephiroth has appeared in the series with one black wing on his right side. As a sign of the dark powers he is using in the series, as well as his connection to Sephiroth, Cloud Strife bears a demonic black wing from his left shoulder. Squall, known in the series as "Leon", has two red wings on the back of his jacket as an allusion to Rinoa.