Cid Pollendina: Oh, shut up and help me remodel the Windy Heights East page!
Please expand this article into a full one. The following tasks need to be completed:This request can be discussed on the associated discussion page. Remove this notice upon completion.

Windy Heights East is a location in Final Fantasy Brave Exvius, which along with Windy Heights West makes up the mountainous highlands that surround the Village of Ambel. On the eastern side, these highlands are adjacent to the lowlands where the Mobreeze Airship Factory was built.

After an encounter with Veritas of the Heavens in the Village of Ambel, they continue their way to the Wind Shrine through the highlands. Rain tells Lid that he is beginning to understand why she is bent on making money any way she can: she wants to build airships without the army's involvement. Though it is a hard path, she believes airships shouldn't be used for killind and destruction; rather they are the key to unlocking human potential.

Lid also tells the trio about the Mobreeze Airship Factory, which she used to visit with her brother Evan and which they incidentally visit after leaving Windy Heights East.

Deal wind damage to an enemy

Party of 3 or less (Companion included) 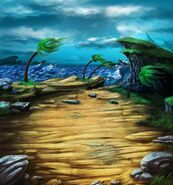