Wyverns are a near-extinct species of flying dragons used as steeds by the Dragoons of Deist.

In the Final Fantasy IV Setting Data Book, wyverns are referred to as the former steeds of Baron's Dragoon Corps which, along with their riders, were phased out of service in favor of more efficient airship technology.

The wind drake is an endangered species, with only one left in each world of Planet R. They are nearing extinction due to the poisoning of dragon grass, which has been the phobia of wind drakes for years. Lenna and Krile both own a wind drake.

King Alexander Highwind Tycoon uses a wind drake named Hiryu (飛竜, Hiryū?) to travel to the Wind Shrine. The drake gets stranded on the Northern Mountains and Lenna—along with Bartz, Galuf, and Faris—rescues him, and flies him to the kingdom of Walse. Hiryu can carry the party past the Tycoon Meteorite to Castle Tycoon where they can gain advanced items and equipment, and Lenna speaks with Faris about her childhood. As Hiryu cannot cross mountains, the party is forced to leave him behind as they continue to Karnak.

In the merged world, Hiryu stops Lenna from being thrown into the Void, and saves her from a monster possession. Hiryu is later found atop the Phoenix Tower where he jumps off to become the Phoenix summon. Krile's wind drake is waiting atop Castle Bal and can be retrieved at any time. A wind drake later saves the four Warriors of Light from the Void.

Wind drakes controlled by the player can cross oceans, but not mountains. They can only land on plains. In the merged world, the Airship and Hiryuu glitch can cause the player to lose their wind drake if they land it atop Ghido's Cave.

In the mobile and Steam versions, obtaining the wind drake earns the "Fear of Heights" achievement. The music that plays whenever flying a wind drake on the world map is called "Spreading Grand Wings".

Wind drakes are known as "Tycoon's sacred dragon". Linaly, Mid's ghost, and Prettz meet one in the Temple of Winds after being ordered there by Queen Lenna.

The wind drake, at first small and weak, soon grows before their eyes. It breaks out of the Temple of Winds and flies Prettz to the Black Moon to face off with Ra Devil. In the end, Hyriuu shrinks to its normal size once it reaches the Black Moon, and Rouge throws it to the other pirates with orders to take care of it.

Wyverns are minions summoned by the Dragoon job, and appear as both allies and enemies.

The Wind Drakes are portrayed just like their counterparts in Final Fantasy II. 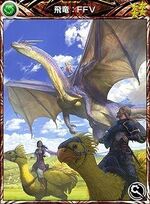 Flying the wind drake on the world map (iOS/Android/PC).

Wind Drake in the credits (GBA).

Wind Drake in the credits (iOS/Android/PC).

Concept artwork for the Anthology release.

Unlike the wyverns of legend, the term "wyvern" for the wind drake seems to just another name for a dragon, as they have four legs and two wings.