Cid Pollendina: Oh, shut up and help me remodel the Wind Shrine (Brave Exvius) page!
Please expand this article into a full one. The following tasks need to be completed:This request can be discussed on the associated discussion page. Remove this notice upon completion.

"Timeless Memories"
The Wind Shrine is a location in Final Fantasy Brave Exvius. It houses the Wind Crystal in its innermost chamber, and is located near the center of the Dirnado mainland, enclosed by its mountain range to the north, south and west. The eastern side is guarded by Galebreak, a checkpoint for the Squall Guard.

After passing through Galebreak, the party finally enters the Wind Shrine. Rain soon senses the presence of Veritas of the Heavens and fends his attack off, but Heavenlord says it took Rain too long to notice him and compares him negatively to Darklord. He believes he lacks sufficient power to join the ancient battle of Aldore and Hess, and so allows the party to withdraw if they value their trivial lives before teleporting away.

The party soon finds Heavenlord and bests him at the crystal's chamber. He is taken aback as they managed to break his helmet, revealing his face. Lid is shocked at seeing him, momentarily distracting the party, which Heavenlord takes advantage of: he destroys the Wind Crystal and teleports away. The shrine thus starts collapsing and the party run for their lives, with Rain taking the shocked Lid by the hand.

Heavenlord sees the party retreat and reflects that, now that Aldore's seal is broken, the Heart of Babel will beat once again. Effectively the Invincible takes off from the Mobreeze Airship Factory. Rain and Lasswell see it fly in the sky, and reflect on the names Heavenlord mentioned, which are the same Fina mentioned at Maranda Coast. Lasswell says he has heard them somewhere, and now remembers. He heard them in a story that Sir Raegen had told him when they were children: the story of an ageless battle waged between Aldore of the light and Hess of the dark. Rain doesn't remember his father telling stories like those; Lasswell privately wonders why Raegen never even attempted to tell such stories when Rain was present, only to Lasswell.

Fina, for his part, asks Lid who Heavenlord really is as she had clearly recognized him. She tells them he was the first Cid, but Rain asks the obvious question: he is supposed to have lived generations ago. But she recognizes that unmistakable face. As there still other great crystals to be protected, they return to Dilmagia where Lid helps them request an airship to take them to Olderion.

Deal fire damage to an enemy

Deal earth damage to an enemy

Veritas of the Heavens

The dungeon uses the usual battle theme "DUEL!!", but the boss theme for the battle against Veritas of the Heavens is "Celestial Battle". In the exploration's boss battle against Terror Knight it returns to being "Onslaught" once again. The field theme is "Into the Labyrinth", which has the crystal theme remixed into it. 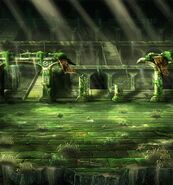