Winchester (ウィンチェスター, Winchesutā?) is a recurring weapon in the series. It is a gun that appears identical to the real world Winchester Model 1894.

Winchester is a mid to high-ranked weapon for Vincent, providing 73 Attack, 120 Atk%, 18 Magic, is long-ranged, and has three linked Materia slots with Normal growth. It can be bought for 18,000 gil at Mideel. 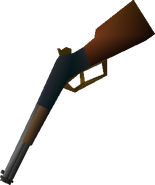 The Winchester Rifle is a lever-action rifle that is known as "The Gun that Won the West". Although it gave the wielder more rounds to fire, most armies of the time would not use this weapon as it prevented the wielder from reloading it in a prone position.