Wild Malboro is a Rank VI Mark in Final Fantasy XII. The hunt becomes available after the storyline events in Giruvegan. It can be found in the Redolent Glade area of the Feywood, the place where Rafflesia was fought and is assisted by some regular Malboros.

Wild Malboro is also fought in the Zodiac versions' Trial Mode at Stage 69 along with four Cassies, where the Volcano can be rarely stolen from it.

Being a mutant Form of Malboro, one of the few remaining in the Feywood, distinguished by its foul Breath which is several Times more rank than that of the typical Malboro. Generally regarded as a Threat to the delicate Balance of Life in the Wood, the Viera have watched it with great Disapproval. Viera Warriors have attempted its Extermination several Times, but were foiled by their own acute Sense of Smell (a considerable Disadvantage in such a Fight), and so a Bill was posted.

Wild Malboro is flanked with a few Malboros, and both types of monsters will inflict a plethora of status ailments. In HP Critical Wild Malboro's Defense will increase, as well as its rate of inflicting status ailments on the party. When its HP is critical, Wild Malboro may use Soul Etude to fully replenish its HP. It can also set up a physical paling.

One can use Faith-boosted Aeroga (or two to be sure) to wipe the Malboros out. Aeroga can be boosted further with Cherry or Cloud Staff or the Staff of the Magi.

The player should bring a healthy stock of Remedies and have all its Lores. Equipping long-ranged weapons to bash Wild Malboro from afar might be a good idea; a powerful gun with Windslicer Shots is useful. Casting Decoy on the party's tank and positioning them so Wild Malboro is not facing the other party members can limit the number of party members affected by Putrid Breath and other attacks. One might want to bring Hi-Ethers or Elixirs to replenish MP. 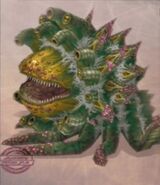 In battle in Tokyo Game Show The Zodiac Age trailer. 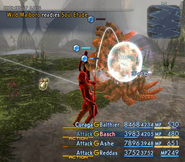 Trial Mode.
Add a photo to this gallery

Retrieved from "https://finalfantasy.fandom.com/wiki/Wild_Malboro?oldid=3263547"
Community content is available under CC-BY-SA unless otherwise noted.