Restores all allies' HP by an amount equal to the caster's current HP.

White Wind (ホワイトウィンド, Howaito Windo? or ホワイトウインド, Howaito Uindo?), also known as WhiteWind and Pearl Wind, is a recurring Blue Magic spell and enemy ability. It restores HP based on the amount the caster has, and in some titles, also heals negative statuses.

White Wind is a Blue Magic spell, which heals the entire party by an amount equal to the caster's current HP, making it a useful healing spell in some situations, but useless if the caster is low on health. It ignores reflect and undead statuses, so it is one of the few ways of healing a party member equipped with the Reflect Ring or Bone Mail.

White Wind costs 28 MP to cast and is learned from Enchanted Fan, Azulmagia, Dark Elemental, Enkidu, White Flame, and Hellraiser (only when controlled by a Beastmaster).

The player can also use White Wind by catching and releasing a Hellraiser, Parthenope, White Flame, or Necromancer.

Strago learns White Wind (Pearl Wind on the SNES) as a Lore that costs 45 MP to cast and restores HP to party equal to Strago's HP. The spell is learned from Curlax, Dark Force, Kamui (only when Controlled), Lady, Marchosias, Peeper, Sprinter, Storm Dragon (only when sketched), Vector Lythos (only when Raged, sketched or controlled) and Venobennu.

White Wind can be learned as an Enemy Skill from Zemzelett by manipulating it. The Wind Wing also uses the skill, but as it can't be manipulated, and the player can only obtain the Enemy Skill by confusing it.

The game considers the ability a physical attack, and it thus also cures Manipulate. The spell's HP and status healing effects are reversed on undead targets, damaging them and inflicting them with myriad statuses, often ending the battle right away when the enemy is petrified. White Wind costs 34 MP. It bypasses MBarrier and Reflect. Provided the caster has a large HP reservoir, White Wind can be more useful than the Restore Materia.

Quistis can learn White Wind from the Whisper item that can be Mugged from Adamantoises (commonly encountered at Long Horn Island). It restores HP to the party equal to Quistis's max HP minus her current HP and does not change depending on Crisis Level. Adamantoises also use the ability on themselves when fought as enemies.

White Wind is used by Quina, healing 1/3 of Quina's max HP to all party members. It is learned by eating a Garuda, Griffin, Zemzelett, or Zuu. It costs 14 MP to cast. It can't be reflected and works with Return Magic.

White Wind is used by Kimahri as a Ronso Rage. It restores HP to all party members and is learned by using Lancet on a Dark Flan or Yenke Ronso; however, it can only be learned from Yenke after he casts it in battle.

White Wind is also an enemy ability that restores half of the target's current HP and removes Berserk, Petrification, Threaten, Poison, Confuse, Zombie, and Provoke.

White Wind is used by a Gun Mage's Blue Bullet, restoring 1/8 of max HP to the party as well as removing Sleep, Silence, Darkness, Poison, Confusion, and Berserk for the cost of 16 MP. It can be learned from Bully Cap, Coeurl, Queen Coeurl, Mycotoxin and Ms. Goon. The only way to learn White Wind is to confuse an enemy that knows it, and then be hit by the attack.

Equipping a captured creature with the Gun Mage dressphere will automatically grant them access to White Wind. It is also normally usable by Coeurl, Queen Coeurl, Bully Cap, Mycotoxin, and Big Bully Cap. Kimahri can learn it if he is healed in battle. However, White Wind cannot be learned as a Blue Bullet this way.

White Highwind is an enemy-exclusive ability and restores 3/8 of max HP as well as removing negative status effects.

White Wind is also an enemy ability used by the Puk family.

White Wind is an augment exclusive to certain monsters, such as the Enkelados mark. It immunizes the target to status effects, much like the Paling and Magick Shield augments, which prevent physical and magickal damage respectively.

White Wind is an ability used by Enkidu during the trial "Battle in the Big Keep", which he uses to heal Gilgamesh. It is also a spell learned by the Blue Mage limited job as of patch 4.5, acquired either as a reward for learning ten Blue Mage spells or from Enkidu in the aforementioned trial.

White Wind is learned as a Blue Magic spell by the Sprite, however, the player will need to either have a Beastmaster to control this enemy, or, much less reliably, surround a damaged Sprite. White Wind is an area-effect magic that heals all in its radius by the amount of HP the caster has at the cost of 12 MP.

White Wind is a Blue Magic spell learned from Sprites, and requires a Beastmaster to learn. It heals for the amount of HP the caster has, but has no effect on the caster, rendering them unable to recover their HP. It costs 20 MP to cast.

Restores all allies' HP based on own HP.

White Wind is a Fusion Ability that heals the party based on the caster's HP. It is exclusive to the Warriors of Light and costs 45 MP to cast. White Wind requires the character to have Monk's Chakra and Dragoon's Healing Breath learned.

White Wind is an ability of the Scholar job, learned for 440 JP at level 4 of the class and costing 3 SP to use. It boosts food and HP by a marginal amount.

In Bravely Default, White Wind is a Genome ability that restores HP of all allies equal to the user's current HP. It is learned from Aero Lantern (must be charmed so it uses White Wind on party). It costs 40 MP to use.

In Bravely Second: End Layer, White Wind is a Catmancy ability for the Catmancer. It heals all targets by an amount equal to the user's current HP and requires a Cat Feather to use. It can be learned from the Aero Lantern and Aqua Lantern. 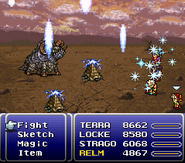